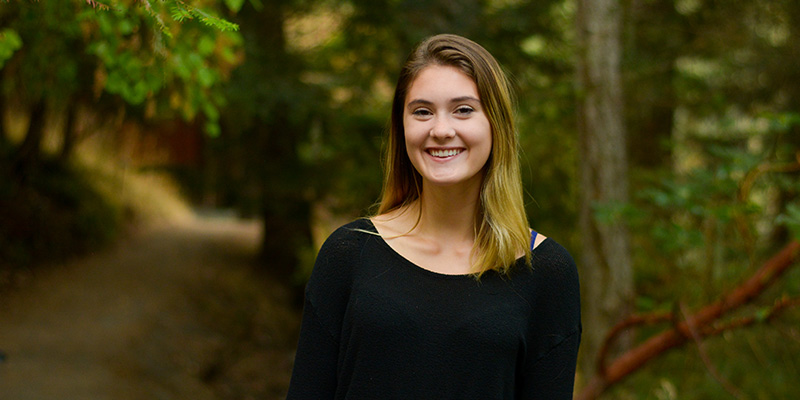 It’s not unusual to see Pearson College UWC alumni running for political office or otherwise deeply involved in organizations striving to make a difference in Canada and around the world. Recently, eNews connected with “new alumna” Kira Brunner (YR 44/2019, Canada – AB) who stood for the Green Party in her home constituency of Lakeland, Alberta during the recent federal election in Canada.

Tell us a bit about yourself:

Have you “always” been an environmentalist? / Had an interest in politics (at any level)?

My family instilled in me the values to respect nature and my surroundings, and we often were outdoors skiing, hiking, or skating. I think the activism aspect came from within myself, though, and a commitment to securing the same rights for others as I have. I “entered” the Internet at the peak of Ferguson media attention (or notable lack thereof) and haven’t stopped researching and informing myself since. In high school, I became a student member of my town’s Community Advisory Policing Committee – I think that was my first major introduction to politics. I can’t imagine myself, now, ever not being involved in politics on some level.

What made you commit to running for the Greens in the last federal election?

I think the Green Party has the best platform to support a Canada that is a world leader for environmental, equitable, and social policies. Not only does the party have the most comprehensive plan for lowering carbon emissions, their platform also includes implementing all recommendations of the inquiry for Missing and Murdered Indigenous Women and recognizing access to opioid treatment and abortion as health issues.

Tell us about the experience:

Were you campaigning “on the ground” or from a distance?

I stepped in to become the Lakeland candidate quite late in the election process, and was not able to spend as much time in Lakeland as I would have ideally. I did have a small team on the ground in the Lakeland while I was in Montreal for school. My goal was to ensure that everyone in Lakeland had a green choice on the ballot.

Either way, tell us about the experience and unique challenges or situations that you may have faced.  For example, you ran in an area that is or adjacent to “oil country” – how were you received as the Green candidate?

I definitely did not expect to win my riding. In the last few elections in the Lakeland riding, the Green Party has won about 2 – 2.5% of the popular vote. I do believe, however, that every Canadian should get the opportunity to vote for the party they most believe in, and I was happy to be running against the other respected and qualified candidates. More and more Canadians are looking to ride the Green wave!

From both the wider issues and your personal perspectives, what were you hoping to achieve by letting your name stand?

Two main things. Firstly, and most importantly, giving all Canadians the opportunity to feel represented in their government. First-past-the-post makes it difficult for smaller parties to make a significant difference in influencing policy, however, no one should feel that their vote is a waste. No matter the traditional winning party of a riding, each constituent should be able to vote for the party they most believe in. Secondly, showing how youth in politics are changing the game. I hope to send the message that we know exactly what we’re talking about. We understand the consequences of our plans, and we especially understand the consequences of the current plans. The internet enables us to access information like never before, and we are less and less likely to simply regurgitate the ideas of our parents. We are thinking for ourselves and are the leaders of today, not tomorrow.

Do you think you would run for office again? Why or why not?

Yes, I think I will. I plan on staying very engaged with the Young Greens of Canada in the coming years and believe I can contribute even stronger to the party in 2023 with a degree and further training. Even if I don’t end up running federally again, I absolutely plan on staying engaged with and perhaps elected to town councils, provincial politics, or otherwise!

It’s often thought that young people are more inclined to become involved in specific advocacy organizations or causes rather than “traditional” party policies. What would you say to your peers about the value (or not!) of amplifying your voice that way?

Of course, generational gaps show fundamental value differences, but I argue that this is even more pronounced under First Past the Post. Older voters are not only the popular vote majority but can also hugely swing seat distributions disproportionally to their population size. I think youth recognize this, and do not have a fundamental issue with traditional political parties, but instead have a disinterest in a system that actively excludes their voices. “Changing the system from within”, or not, is a personal choice. For me, the Green Party’s commitment to moving to a Proportional Representation system and lowering the voting age to 16 is by far the best policy to engage youth from a traditional party. I am happy to support them “from within” for these reasons.

I would like youth readers to know that “participating in politics” doesn’t have to be an unattainable feat – it’s accessible to all Canadians, regardless of age, just as it should be. It can be as small as sharing party platforms on your Instagram story, and it can grow into voting, volunteering for the party you believe in, participating in youth councils on all levels of government, and running for a party. We all have a responsibility to stay engaged to make our country the best it can be.