Working to Preserve Local Waterways with the Peninsula Streams Society, thanks to the Victoria Foundation’s Vital Youth Program 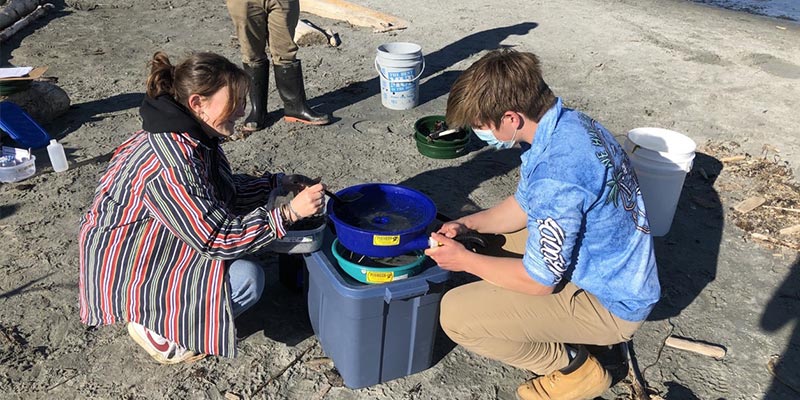 My name is Viggo Henelius, and together with Carter Ayasse (YR 47/2022, Canada) and Ella Bishop (YR 46/2021, USA), we have been working with the Victoria Foundation since October of 2020 through their Vital Youth Program. The foundation works to introduce youth to the field of philanthropy, working primarily with nine schools in the Greater Victoria area, including Pearson College UWC.

Using the United Nation’s Sustainable Development Goals (SDGs) for guidance, we were tasked with finding a charity in the Greater Victoria area that contributed to one or more SDGs. As both Carter and I live in coastal environments, where the diminishing wellbeing of the world’s oceans are becoming increasingly obvious, we chose the “Life Below Water” goal. The budget for the donation was $2,500.

Peninsula Streams Society is an organization whose primary purpose is the restoration and conservation of habitat in the Saanich Peninsula, with the goal of laying the grounds for self-sustaining populations of species such as salmon.

After contacting several organizations, we chose this organization because of the fact that they advocate for habitat restoration for species like salmon, rather than breeding the fish artificially and releasing them into a stream. They are also heavily involved with a broader push to restore herring stocks, a project whose success can determine the future of marine ecosystems off the coast of B.C.

I got in touch with Ian Bruce, the contact person listed on Peninsula Streams website. He, after hearing our offer, set us up with Brian Koval, who introduced us to the BEACH Program. The program is an effort to document forage fish spawning grounds (such as herring) along the coast of Vancouver Island.

Brian brought all of the equipment necessary for sampling the sediment below the high tide mark and gave Carter and I a crash course in the process. Weir’s Beach, which is within walking distance of campus and well known to many students and alumni, was the target of our survey. Every three weeks samples needed to be collected and examined with our goal being to incorporate this knowledge and activity into the Marine Science program.

On the 28th of March I found eggs in a sample taken at Weir’s beach (see picture). The find represents a vital data point in mapping spawning habitat of forage fish, allowing for better and more careful management of spawning habitat. It was also the find farthest from Victoria yet!

We hope to continue the collaboration with the Peninsula Streams Society, allowing future Pearson students to get involved with the BEACH program, and truly work for a sustainable future.