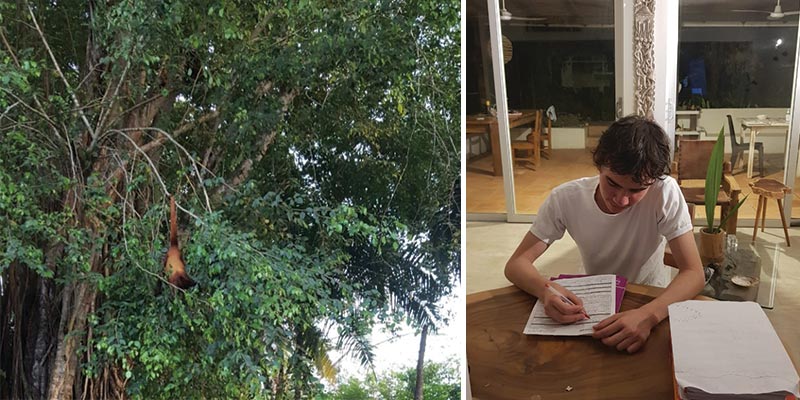 Turning your head to glance out the window from a classroom on the beautiful Pearson campus can be distracting at times, though not because of the monkeys in the trees outside. But when necessity demands that “classrooms” become spare rooms, kitchen tables and student bedrooms the distractions become many and varied.

Alan, a Year 46 first-year student from Columbia, had to decamp quickly from Pearson due to the COVID-19 pandemic and made it home to his rural community just four days before airports in his country closed to virtually all international flights. He was one of a handful of students who took part in a “virtual coffee break” with a few staff and faculty from Pearson in mid-April.

“Four or five times a week, wild howler monkeys come to get food from the trees outside my home,” said Alan. “I have been distracted more than once when I see them from my window!”

That said, dealing with primates in the trees outside your study window is probably one of the easiest challenges of moving from on-campus to a remote learning and education experience on short notice during a slow-moving global pandemic.

Alan added that he misses the easy opportunity to ask teachers questions during in-person classes but that the virtual version of his small Spanish class was still a good place, “where it’s nice to see my friends.” There are occasional periods of sketchy internet connections and concerns about the family business during a time of self-isolation but there are compensations too.

“My big brother is here with us and so is my younger sister. She’s nine years old and she’s really fun – we play soccer together.”

No matter which school you look at, a campus classroom is a relatively controlled environment, points out faculty member Paul Faber.

“In my classroom, for example, there is one room, one set of desks, one projector and (usually) only one person talking. But just a few minutes ago, I had a class with 36 people – well, those students are in 36 rooms in 36 houses with 36 families and 36 pets and renovations and pipes working and toilets flushing going on all around them.

“Someone’s dog could show up or a child could pop into a picture,” he marveled, acknowledging how the realities of everyday life affects students’ individual classrooms. “There is an exponential amount of disruption variables!”

Another student, a Year 45 who prefers not to be named, was unable to return to their home country and is currently staying with a welcoming host family in a smaller British Columbia community.

“I knew (the transition) wouldn’t necessarily be easy because it is hard to always focus on my classes,” they said. “But the teachers are doing their best to make sure we understand the syllabus and are making sure we finish our IB assignments. I’m really glad they are still our teachers and are still giving their best.”

With a healthcare system that is less robust than that of Canada’s and, to paraphrase, an uber-masculine political system in their homeland, this student feels, even though they miss their family, “it’s definitely safer for me in Canada.” But, as a dedicated and hard-working scholar at Pearson, they are in the fortunate position of having a few university options to consider.

One Eswatini (formerly Swaziland) student became marooned in London, U.K. when South Africa, which surrounds landlocked Eswatini, closed its borders to international travel. Fortunately, thanks to quick work on both sides of the Atlantic, including reaching out to Pearson alumni in the British government, the student was allowed to stay in the U.K. instead of being immediately sent back to Canada. Pearson alum  Pontus Pettersson (YR 21/1996, Sweden) and his family then stepped in to host the student at their London home for more than a month, enabling the student to continue with their studies.

Year 46 student Sierra and her parents in Calgary, Alberta kindly offered to host another fellow student from Eswatini and and one from the Dominican Republic who were unable to immediately travel home. While the student from Eswatini has since been able to travel, the family continues to host the second student, enabling her studies to continue.

As online studies became the norm, faculty understood how important it was to mix up the routine of longer online classes to keep students engaged. Using the breakout rooms function of online video learning platforms is something that Dean of Studies and Biology teacher Emily Coolidge utilizes.

“I realize that’s a great option for online learning – the students are appreciative and like the group work to do some research or simply to work together. Recently, she broke her biology class into five breakout rooms of three or four students each, “to work on making connections between the immune system and other parts of the curriculum that they’ve studied.

“I gave them 15 minutes and they created a slide and we put a presentation together and then they taught each other.”

In other words, during this pandemic, we’re all learning together.