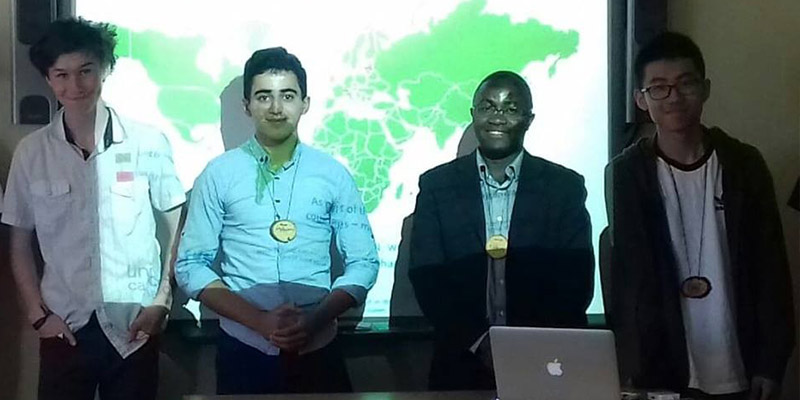 What do UNICEF, PSYL and Pearson College UWC have in common?

One of the highlights of this year’s Pearson Seminar on Youth Leadership (PSYL) summer program was a day that brought together seven external speakers and activists on campus to offer PSYL participants workshops on topics such as climate ecojustice, social justice, gender diversity, rights of Indigenous people and many more.

One of the key guests and workshop leaders was John Nsabimana, currently a Senior Freedom of Information Analyst for the Government of British Columbia, and, equally importantly a UNICEF Canada Ambassador.

Having escaped the genocide in Rwanda that killed both his parents in 1994, John grew up working towards becoming part of UNICEF, the United Nations agency that works in 190 countries and territories to save children’s lives, to defend their rights, and to help them fulfil their potential, from early childhood through adolescence.

In 2004, Pearson College UWC became John’s second home. Only two years after graduation from Pearson, he was appointed Regional Youth Representative for UNICEF British Columbia before becoming a UNICEF Canada Ambassador in 2010.

Armed with a passion to inspire upcoming young changemakers from all over the world, John returns every year to his Pearson “home” during the PSYL speaker’s day event to deliver his workshop about the work of UNICEF Canada.

Speaking about children’s rights, education, healthcare, water sanitation, child protection, John urged all the 15-18-year-old emerging young leaders to each make a difference by creating change starting from their own passions, no matter how significant or insignificant the change might seem to them.

“Every change happens by taking action,” John told his eager and receptive audience, but more importantly, he reminded them that, “sufferance can be the womb where success is born.”

Editor’s note: With thanks to Mohammed Ammori (YR44/2019, Palestine and PSYL Animator in 2018) for compiling material that made this story possible.