Welcome (back) new (and returning) Pearsonites! 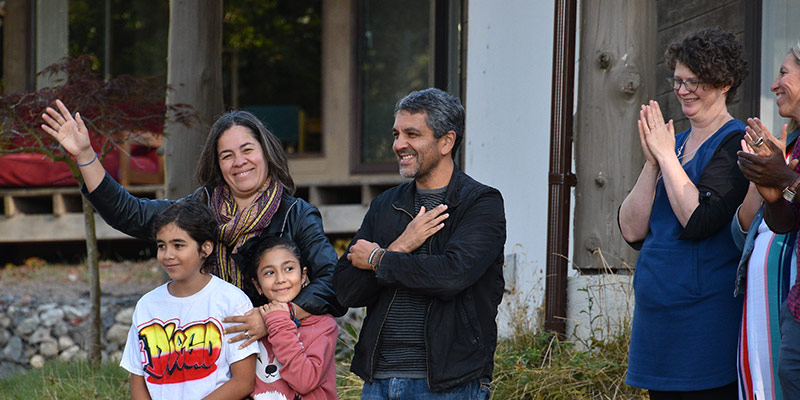 At this time of year we are always pleased to welcome (back) new (and returning) Pearsonites!

The Pearson campus is first and foremost a two-year, pre-university school for up to 200 students from up to 160 countries. But it is much more than just a school. It is also a work place, a gathering place for the local community, a place filled with memories and of reunions and home to an entire community made up of students and on-campus residents and their families.

As we welcome our students (back) to campus each year, we would also like to extend our warm welcome to our newest additions to the resident campus community. Please join us in welcoming the following new members of our community:

Alumna Virginie Magnat (YR 9/1989, France) joined us as IB Theatre Literature Teacher, taking over this role from our now-retired colleague Libby Mason. Virginie and her partner Robert Ornellas have moved into residence #3. Virginie was most recently Associate Professor, Department of English and Cultural Studies, Languages and World Literatures with UBC Okanagan in Kelowna. A French citizen of Occitan ancestry, Virginie has a personal commitment to cultural diversity, cross-cultural performance research and pedagogy as a powerful site of encounter, exchange, and collaboration, values initially established during her two years as a Pearson student. Virginie has a Ph.D. in Drama and Theatre from the University of California as well as a number of other academic credentials.

Economics teacher Samuel Perez de Leon and Berenice Sanders, along with their children Sarahi and Diego will be the new Calgary House Parents, coming back to campus after a year of sabbatical leave, during which they pursued personal passion projects.

Angela Gatari, our new Community Events and Partnerships Manager, her husband Hinga and their two sons Manzi and Shema will be moving into residence #13 in October. Angela brings considerable experience in communications and event management and worked in Japan for more than a decade in the fields of public and international relations. She is the past Vice-President of the Victoria Immigrant & Refugee Centre Society.

Reese Harrison, College Medical Assistant, started his work with Susan Duffell-Warthe, RN at the health centre. Originally from Alberta, Reese moved to Victoria in 2016 to complete a Bachelor of Science in Microbiology and has worked in the emergency medical services field for a decade in both Alberta and British Columbia.

Experiential Education Coordinator Marija Uzunova Dang and her partner Arvin Dang join us from India, where they both lived and taught at UWC Mahindra College.

Marija is Macedonian and has lived in many different countries, in Bulgaria, the Netherlands and Germany. Prior to joining the Pearson community, Marija lived in India – both leading and directing outdoor expeditions and involved in house parenting, teaching and the creation of the project-based diploma at Mahindra.

We invite our worldwide Pearson College UWC community to join us in extending a warm College welcome to all our new campus residents.