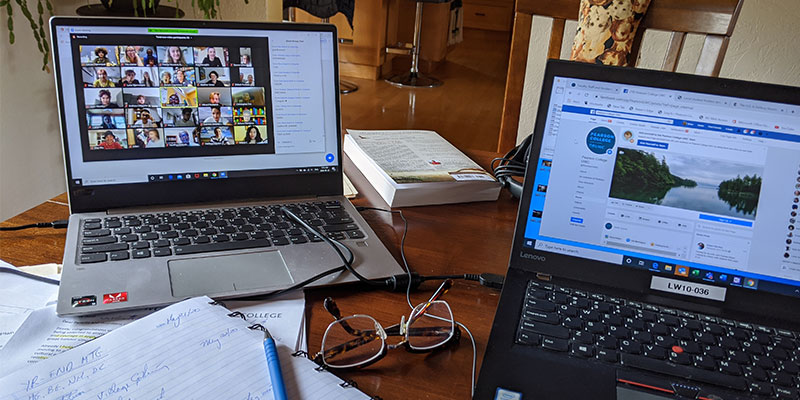 Our first fully virtual Village Gathering and “graduation” during the pandemic which shall not be named (at least in this story) was a rip-roaring and engaging success, even from the perspective of my partner’s dining room table (around which, three of us have been isolating, as per our public health authorities, for about 11 weeks now).

Like any Pearson Village Gathering (capitalized because they’re really important to us!), it was a little bit free-range and a touch unpredictable (full marks to the wit who used a shower stall to augment a virtual Bay Jump, by the way). As a formal (not a word we use too much around Pedder Bay but let’s roll with it) graduation, it was like none I’d ever had the pleasure of sitting through. My personal memories of “grad” involve unforgiving church pews, making sure you had an extra program to use as a hand fan in Prairie heat and a questionably-choreographed flock of flying mortarboards just before everybody was released back into the outdoors (before reassembling a couple of hours later in a similarly-overheated banquet hall).

So, ours was nothing like that. Which is probably why I’ll remember it for a very long time.

It was sincere, composed with a deft hand to balance what-the-students-wanted with what- administrators-needed (call it an 60-40 split) and agreeably-rowdy at times. And, at the dining room table, and a couple of hundred desks, bedrooms, backyards and maybe even the occasional home office around the world, it was, ahem, experiential.

Yes, of course there were the usual remarks (upbeat, genuine and earnest, but maybe the speechwriter could lay off of all those adjectives, huh!?) from hard-working Pearson leaders (a former Deputy-Prime Minister of Canada! and a retired Rear Admiral!) who are keeping the lights on (metaphorically, in some cases) on campus and the practical reality of a global education institution during a time of locked-down international travel very much alive.

So alive, in fact, this is how we feel about the coming academic year:

Here at Pearson, we have every intention of welcoming students who are able to come to campus for the anticipated beginning the 2020-21 school year in late August, subject to public health directives, protocols and regulations requiring those coming from other countries to self-isolate that may be in place at that time. President and Head Ty Pile

There were encouraging words to the students, expressions of gratitude to the parents and family members who supported their charges when they were far away at Pearson and when they were, all of a sudden – back underfoot at home. There were tributes to faculty and staff who, “again, put the students first and foremost.” There was an excerpt of Leonard Cohen’s Hallelujah and heartfelt words from choir conductor and music director Teodora. There was a photo montage of Year 45s — then and now – from my inspiringly-capable co-worker Nikola, more wise and wonderful words (cue hand heart gestures) from Heather, Kim and Adriana (hey, if everyone who wanted say great things about Year 45, and the Year 46s who joined the fun, we’d still be livestreaming!).

There were technical glitches (but that’s why you’re reading this instead watching the Facebook version, right? Never mind, go ahead, we edited the glitches out) and a hoppy lip dub of Forever Young (not this version, but you’ll want to give this one a listen anyway; trust me) featuring assorted Pearson humans (and Pancho).

On the social media version, you won’t see the “20 seconds to say want you want” granted to each Year 45 but (again, trust me), if you’ve ever had a Pearson student or alum in your life, you’ll be able to extrapolate:  emotional, funny, meaningful, kooky and loving. Sometimes silent, sometimes pixelated, always expressive.

Families of students – all of whom were invited to share the Friday morning (or afternoon, evening, wee hours, etc. depending on your location) celebration – did their part too. Squinting at those tiny little boxes on the screen revealed, among other moments – a student presented with a floral bouquet, a family gifting a scholar with a sweet, homemade cardboard mortarboard (which was so great it got a pass from my earlier critical analysis) and another young man who donned his own graduation cap. (Happy Belated Vappu!)

Maybe, with luck – let’s hope – we’ll never again have a fully virtual graduation, end-of-year celebration. Maybe this is a once-in-a-lifetime event (maybe I’ll get over my hyphen fixation, too) because the present pandemic will be only a memory. Maybe, but for now, this will be a happy memory of the time during which we all lived around the virus which shall not be named.