Virtual fête: 5am at Pearson, Midnight in New Zealand

Or, how to make 12 hours of online reunion happen in under a month…

Editor’s Note: On 13 June 2020 Pearson Years 3, 4, 5 & 6 celebrated their 40-year reunion virtually. Due to the ongoing pandemic with travel restrictions, lockdowns and closures, dedicated alumni from that group teamed up and took their reunion online with less than a month to spare to organize the event that featured a multitude of shared video messages, dinner in Zoom breakout rooms (or breakfast, lunch or snacks depending on the attendees’ time zones) and of course the obligatory dance party to close it all off.

This article is a recount of the event, or FÊTE, as the group dubbed it, by two of it’s participating alumni Fides Krucker (Year 4/1979, Canada-ON) and Beatriz Enriquez Quezada (Year 6/1981, Mexico)

Several hours after its finish, I am still floating on the euphoria. So wonderful to see familiar faces and to make new friends too

The idea for the virtual fête was simple: a replacement for the gala and performance night that would have happened at the cancelled Years 3 – 6 reunion. At previous Pearson reunions I had often situated performers throughout the campus to animate the home we knew so well as students. At a reunion in the late 90s the choir sang around the pool while Garry and Helen’s kids did underwater Scu-ballet wearing neon lights (they were still kids then)! At another reunion Magugu sat on the Max Bell steps and sang with his guitar, an Armenian folksong floated under the whale skeleton, and Duane projected his photos on the admin building facade.

This year we would not have the campus terrain we loved so well to hold the reunion experience, but we could become a shared landscape by embracing as many time zones as possible all at once.

I checked in with a few alumni to see what they thought, and everyone said, DO IT! Michele Pecoraro and Todd Van Vliet came on board through recently reignited Pearson College Alumni Association (PCAA) friendships and we began to plan and practice for the event. 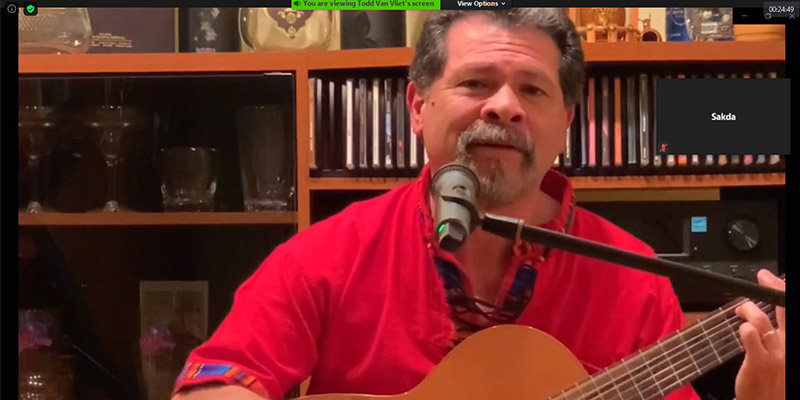 Because Wi-Fi is so unreliable we thought the stability of “screen sharing” short performance clips or verbal greetings could be a way to set the tone and move the event forward between breakout rooms — similar to passing one another on a campus path. Through simple phone videos our present selves could say hello from our gardens, or share a hobby, or thoughts about the state of the world. Shelley Craig (Year 4) and I stitched almost 60 clips together for maximum flow. Shelley also managed the registration for our event.

We began our time together with an acknowledgement of the unceded, traditional territories of the Sc’ianew (Beecher Bay) First Nation upon which our campus was built. Learn more about Pearson College UWC’s efforts towards reconciliation.

The mini-clips participants sent in were not just fun and touching they were also functional: they bought us time behind the scenes to put people into breakout rooms. These breakout rooms were places to talk in small groups — 6 to 7 alumni per space for 35 minutes at a time. We had three of these breakout conversation sessions throughout the event —it was a little like going to a reunion and ending up at a table with people you might not have been close to at the College … but could now be curious about.

…you have made me cry, laugh and dance.
I am so grateful for the experience of connecting after so many years… 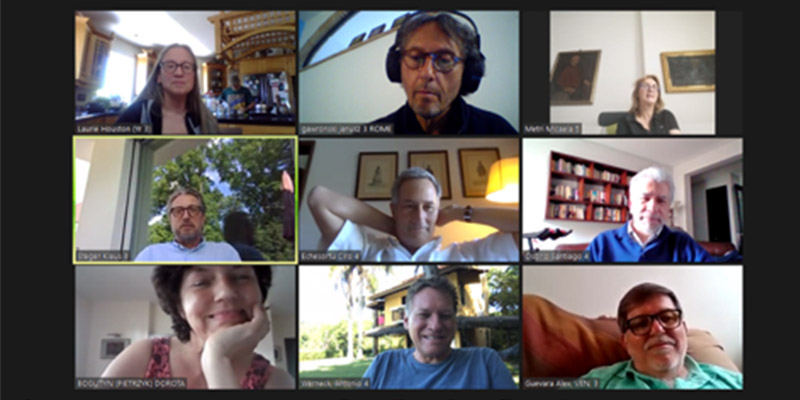 The third mini-clip section became a memorial ceremony. Our need to honour those who had passed away became clear at our fête practice the weekend before the actual event. Marc Flynn (Year 4) graciously offered to gather photographs and his niece edited them together and added music. I introduced the memorial video by singing “Ev’rytime We Say Goodbye” and we followed the video with a two minute guided meditation by Patricia Williams (Year 6), and Judith Davies’s touching haiku for Gillian Parnaby who passed away in March (both are from Year 5).

And finally, the dance! It was our biggest gamble! How to recapture the fun and excitement of Saturday night after sitting on our rear ends for a few hours, or is that for a few years?! But as soon as Pier Massa’s late 70s, fiercely edited (10 songs in 10 minutes), dance tape started, exuberance took over and everyone shook whatever they could in their own little online square while scrolling through the other 130-some attendees.

After the virtual shake out, the whole group freely wandered through the virtual rooms, which for some spontaneously lasted another three hours.

Such a gift … Stay healthy and hope to see you soon in person.

However, there was more to come. The following day was more impromptu starting with a sing-a-long with Suzanne Jacob (Year 4), moving through meditation with Patricia Williams (Year 6), Laurie Houston’s dentistry/medical aid project (Year 3), a ‘State of the College’ presentation from Pearson Board Member Ciro Echesortu (Year 4) and Jorge Titinger (Year 5) and ending with a ‘live-from-his-living-room’ sax concert by Richard Underhill (Year 5). We spent six more hours of shared time. 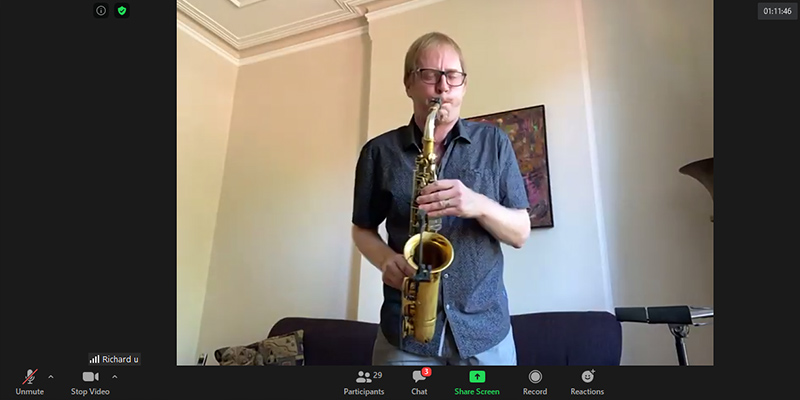 Tandem to the online activities was an online auction initiated by Carl Murphy and Karen Thomas which raised close to $2,500CAD. Congratulations!

After our two days the main feeling and takeaway for the organizers is how much affection was generated. We are amazed and humbled to know that an online experience can rekindle such a strong sense of community. During this time of uncertainty and change we wonder if this affection can turn into action?

As in-person gatherings may be little ways off, the PCAA  plans to host another virtual reunion event in late August or September with themed conversation rooms. Stay tuned! (And if you want to help, let Fides, Todd, Sarah B, Dany C or Michele know.)

I am full of gratitude to everyone who threw themselves behind this idea, to improve it, and bring it to life.

We should have them (reunions) more often. Quarterly perhaps!

When the original plans were made for a much anticipated reunion, I was very excited to visit the grounds where my soul is deeply connected in so many ways — Pearson College UWC — a place where deep, life-changing relationships were shaped. When the onsite event was cancelled due to the global pandemic, I felt deflated and sad. However, the WhatsApp Reunion group re-ignited the light in me, and soon after the idea was announced of a virtual reunion, I felt a sense of hope.”

In the beginning, I was skeptical of the idea of only seeing everyone on the screen. Wanting to get more time with some of my co-years, I volunteered for the technical rehearsal the week before. My mind and my heart slowly opened to realize it was the best thing EVER. The night before the 13th I could not fall asleep, almost like the day before I was heading to Pearson College UWC back in 1979. The magic started unfolding, as face after face showed up on the screen while Pearson choir recordings played in the background. The agenda and the pre-work done by the volunteers were stellar. Having mini-clips sent in by everyone during the Zoom reunion kept possible connection glitches at bay. The memorial ceremony brought a deep sense of gratitude; feeling honoured to have known the ones gone before us. I stayed for six full hours — not nearly long enough — to chat, learn, inquire, laugh and be amazed by a concert, as well, the next day. The light in me today is stronger, to participate and to engage more than before.