The Canadians are Coming to Pearson 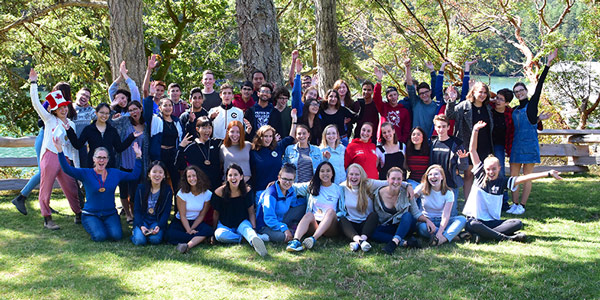 Editor’s Note: This month’s story focuses on the young Canadians who will be attending Pearson College UWC for the first time. Watch for the story of Canadians who are scheduled to make their impact on 17 other UWC schools around the world in next month’s Pearson eNews.

If you need words to rouse your spirits out of the (northern hemisphere) summer doldrums, then read on…

“I come from a country where the girls and women have very restricted opportunities to study and go to university – in fact, the opportunities are close to zero. As a girl who has been raised with better chances I’m motivated to fight against these traditional and unreasonable restrictions. I’m going to create a chance for girls to get an education.”

The young woman who wrote the words above is slated to attend Pearson College UWC this fall and the multilingual, multi-scholarship winner, originally from Afghanistan, is looking forward to expressing her thoughts, culture, traditions and “being able to learn, learn, learn” together with the more than 100 other Year 46 students from around the world who will begin arriving on campus in late August.

Nina Moroso, UWC National Committee of Canada (UWC-NCC) Executive Administrator, has an excellent handle on the background stories of the 57 Canadians who will be attending Pearson or one of the 17 other UWC schools this coming academic year, having interacted with most and having met many of them. The quote above represents one of the most compelling stories.

Altogether, about 28 Canadian* students – all with their own unique stories to share – are scheduled to attend Pearson beginning next month. Coming from virtually all provinces and territories, and for non-resident Canadians, from lands as diverse as Malawi, Japan, Switzerland, Hawaii and Belgium, they represent a rich milieu of experiences and motivations.

For example, a young woman originally from a community on the shores of Great Bear Lake in the Northwest Territories who left her home to pursue studies in the territorial capital of Yellowknife proudly declared that she saw the UWC as a way to help her pursue her passion for bringing environmental science in closer harmony with the culture of the Dene Nation and people and their connection to the land and the water.

Another young Indigenous woman from Haida Gwaii, islands off the northwest coast of British Columbia, is a member of the Gwaii Trust Youth Board, which is part of the Gwaii Trust Society that owns and manages a multi-million-dollar perpetual fund for the benefit of all the people of Haida Gwaii. She is also part of a group of young activists working to ban the use of single-use plastic bags on the archipelago.

Moroso, together with UWC-NCC Chair Jennifer Dueck, an alumna of UWC Li Po Chun in Hong Kong, were quick to point to the dedicated and thoughtful work by volunteers with the national committee, as well as provincial and territorial chapters, whose energy powers the unique, merit-based UWC student selection process in Canada.

“UWC-NCC volunteers are among the most energetic and dedicated people I’ve ever met,” she added. “Most are alumni from Pearson and other UWCs who bring a diversity of perspectives and experiences to the table and commit thousands of hours of work to make the Canadian selection process fair, thorough and successful.”

As in past years, several common themes emerged from the applications completed by students selected to attend UWC schools. Many received the “tap on the shoulder” from a loved one or an influential person who told them about their own UWC experience. Other applicants attended a UWC summer program, such as the Pearson Seminar on Youth Leadership.

“And, this might be a first, but one successful applicant heard about UWC through her grandmother who was a student at Pearson in decades past,” said Moroso. “This particular student is also from Canada’s north – from an Isolated community – and works to sustain traditional ways of life, learning and language in her family’s region of the Arctic.”

She noted that the parents of another ultimately successful applicant actually met while students at Pearson, “back when (former Pearson Board Chair) Tony Macoun was Head of College.”

The story of students coming to Pearson is also one of individuals from rural areas, small towns and distinct neighbourhoods in major metropolises – young people with part-time jobs at a local Burger King or an Eggsfruits restaurant who worked to keep the family afloat financially and quiet leaders who raised thousands of dollars to support research into chronic conditions simply because an aunt has lived with Multiple Sclerosis for decades.

For many, a common core of athleticism runs through their lives, whether that takes the form of competing in long-distance cycle events, wrestling in the Arctic Games or learning new routines at circus school.. A love of the outdoors and wilderness pursuits also, not surprisingly, is sprinkled throughout many of the applications.

And, of course, a core value that so many incoming students display is passion – passion for social justice and positive community and nation-building, passion for specific causes close to their hearts, family and friends and, across the board, a burning desire to leverage the remarkable opportunity of a UWC education. And these young people are realistic and enthusiastic about what lies ahead.

As one student put it, “I need a path with many barriers because I like breaking them!”

Welcome to Pearson and the UWC!

*The definition of “Canadians” for UWC National Committee of Canada purposes includes non-resident Canadian citizens and, in a small handful of exceptional circumstances, non-Canadians with a unique connection to this country.

Watch for more information on the upcoming Canadian UWC application period that begins in mid-August on  www.ca.uwc.org and www.pearsoncollege.ca and related social media channels.