The art of Houseparenting 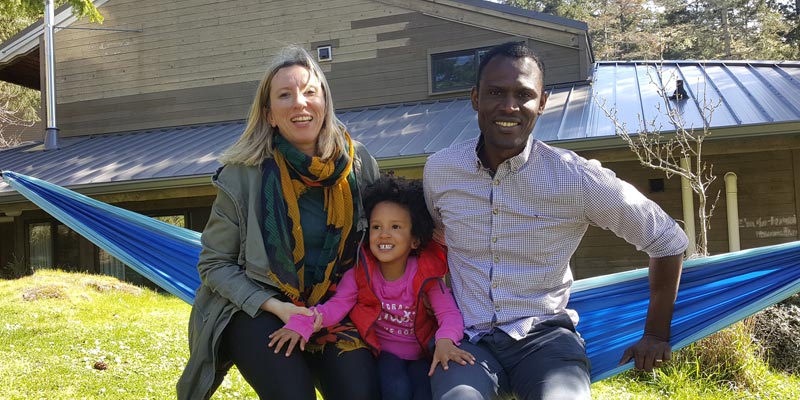 Imagine throwing together up to 40 students from all corners of the world, a Canadian house buddy and a family of three, who were all born in three different countries (Senegal, Poland, France): et voilà, you have McLaughlin house (MCL) and their new houseparents Aziz and Alexandra, who goes by Ola, with daughter Sophia and house buddy Travis.

After a summer of intense and complete renovations in 2018, MCL opened its doors not only to the new student cohort of years 44 & 45, but also to Travis, Aziz, Ola and Sophia.

When he arrived on campus as a new French teacher in 2015, Aziz Faty, originally from Senegal, might not have been able to picture himself as a future houseparent. Having left his partner Ola and little baby girl Sophia behind in Paris, must have been very hard for the young father. But alas, after a year of missing each other, adapting to a much quieter “neighbourhood” and travelling back and forth between Paris and the Metchosin campus, Sophia and Ola joined Aziz a year later in 2016.

“It was a big change for me at first,” explains Ola with a smile. “We lived in a very lively neighbourhood in downtown Paris, close to the Gare de Lyon. It is hectic, noisy, with plenty of restaurants and things to do,” she recalls.

“I am a city girl, and I was afraid at first of how I would cope with such a remote location.” But, she told us, she was so warmly welcomed and supported by the entire campus community, that she soon found her place within this new life.

When prompted by Julia Clark (YR 27/2002, Canada-BC), Dean of Students and an alumna herself, Ola and Aziz were excited to take the next step and apply as house parents for the 2018/2019 academic year.

“We talked about it as a family,” remembers Ola. “I was eager to become more deeply involved with the campus community. So, we decided to apply.”

Aziz adds to this that “We knew that we had been selected in January 2018 and we feared that we might not be prepared enough for the job, but it turned out, yet again, that we received lots of support from the community, and from the students themselves.”

Stepping into their leadership roles, second-year MCL students, naturally filled in the gaps with background information on how things were run in MCL in the past year.

“Everything in MCL was new: The house, student cohort, and houseparent – house buddy team. That was challenging, but it all worked out,” says Aziz. “Now, after more than one full term, they know us, we know them, and a routine has set in. We feel much more confident.”

Every first Saturday of the month, Aziz and Ola host a French crêpes brunch, where the entire house community comes together. “It is so great to see students having fun in their house, making it their home with their new friends and ‘family’.

“Our door is always open and students come for tea or coffee, a chat and to talk about school and life in general. It is great to have Travis with us and we communicate well as a big family,” Ola explains.

“Sophia has made it her home now too, as she thought of MCL as Mina’s, daughter of former houseparents Raphael and China, house. Students are so kind and sweet with her and she now has almost 40 older siblings.”

But, Aziz adds at the end, the hardest part of the transition from resident in the duplex building to houseparent at MCL is, that he has to commute now! It is way farther to his classroom in the Max Bell building from MCL than from the duplex that is right beside it.

We are so glad that this is the hardest part.