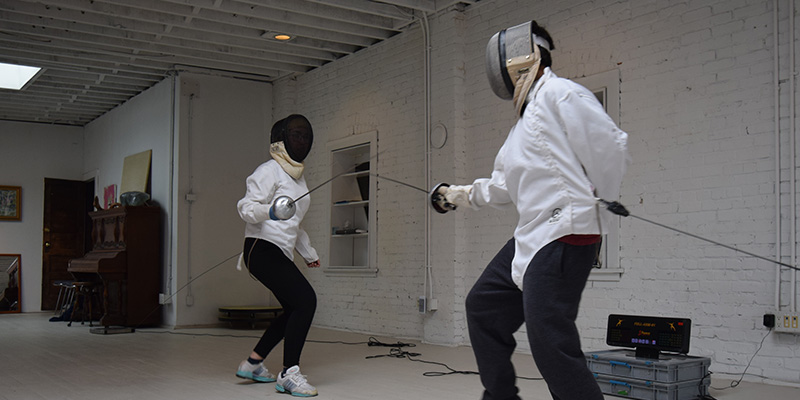 So, ‘how is Project Week so far,’ was the innocent question.

“Oh, it’s amazing! It’s so interesting,” exclaimed Zhibek Nurtaza (YR 45/2020, Kazakhstan). “The very first time I took the class here – it was three hours – I was so happy but at the same time I was a little bit nervous because obviously I had never held a sword in my life. Then I figured – I really enjoy this!”

Swordplay may not be most people’s first memory of Project Week – the annual springtime week in which Pearson College UWC students are asked to create and experience mentally and/or physically challenging self-directed adventures – but it’s not exactly out there either.

This year’s Project Week initiatives ranged from attending the Forum for Young Canadians in Ottawa to comprehensive planning for Pearson’s Women’s Empowerment year to expedition kayaking or sailing to exploring intersectionality and social justice. All students are required to follow up the week with written reflections and deliver a public presentation about their experiences and conclusions that is open to all on the campus community.

A week of fencing instruction at a donated downtown studio space in Victoria’s historic Fan Tan Alley is a first, though. The idea was the brainchild of Donovan Faraoni (YR 45/2020, Canada-QC) who is an enthusiast of the “combat sport” that is sometimes called the first European martial art.

“The reason I decided to organize it was because I was introduced to fencing at first by a silver medalist from China who opened up the opportunity for people who were interested,” said Donovan. “I loved fencing after that and I wanted the opportunity to share.”

Donovan, who has trained for two years, added, “I’ve done foil and epee. (Epee) is made differently, bends less and is heavier. (The foil) is lighter and it flexes a lot more on the target. They are different weapons – (the epee) is originally derived from the rapier, this one (foil) is simply lighter.”

Donovan, in typical Pearson student fashion, took the initiative to contact the UVIC Fencing Club. “I thought it would be nice to approach them with this idea when the time came to organize project week.”

“(Donovan’s call) was a little out of the blue,” said volunteer instructor Caleb McIntosh. “But fencing is one of those things that I think a lot of people want to try – in the last couple of years we’ve been working on getting fencing in more schools, for example.

“A big part of our mission is to spread the word about the sport and to give people a chance to try it out and this seemed like a really good opportunity,” added Caleb, who is head instructor for the university’s fencing club and is part of the Victoria Fencing Club.

Caleb focused not only on the form and physicality needed to fence but also on the protocol and respect that are integral parts of the sport. He led training for all four Pearson students participating in this project week initiative.

“That is a big challenge – de-intimidating and just getting people comfortable with the sport” said Caleb. “For example, on the first day we worked just to get people used to being hit with swords – there is a natural reflex to avoid that. Everybody can be a little bit shy, I find, the first time when they are trying something new. I feel like once you get into it and have the chance to fence a bit more, it’s pretty great!

“It’s really fun for me to get to see how people progress from the first day, as they go through the basics. We spend a lot of time on safety and getting comfortable with the sport.”

In addition to Donovan and Zhibek, students Deandre Gutierrez (YR 45/2020, USA) and Danik Savoie (YR 45/2020, Canada-NB) also trained during the week. Both were enthusiastic beginners who acknowledged that part of the attraction was the chance to explore a sport they might not otherwise have the chance to learn.

“I would say it’s a mental and a physical challenge,” said Deandre. “Physically, we are pretty active anyway at Pearson…but fencing is very challenging and very strategic — and a lot of fun.

The mental challenges go along with physical ones. “I had to learn how to hold my feet in a certain position – I have to learn to keep that position because that’s something I struggle with. So, I not only have to keep my feet like that, not crossing, not tripping while still focusing on the blade and moving everything properly and concentrate on protecting my body from the blade.”

Danik, who is quite tall, was asked if his height gives him an advantage over opponents. “In fact, yes, and no. For epee having more distance with your arm can be more advantageous because during epee if both fencers hit, both get a point so if you can hit first you get an advantage but talent, skill and ‘mind game’ are the things that give you an advantage.

“You are always thinking. Me, I try to use strategies and I know Donovan has a lot too. But also having good reflexes and good technique is very important! I think as well that the protocol help makes it real; to have the salute at the beginning and to have a real ref to make it more safe and attentive.”

“This is my first time fencing. I thought this would be a great experience that I might never have otherwise…Project weeks, CAS weeks – these are occasions to do things you have never done before!”

Donovan, who first visited the Pearson campus when he was in grade 6, and “could hardly believe it – for multiple weeks,” when he was accepted to the UWC school, specifically wanted to thank long-time UVIC Fencing Club volunteer Veronika Ho for the club’s support, as well as volunteer instructor Caleb. “I would not have been able to do this without their support – I really appreciate it.”