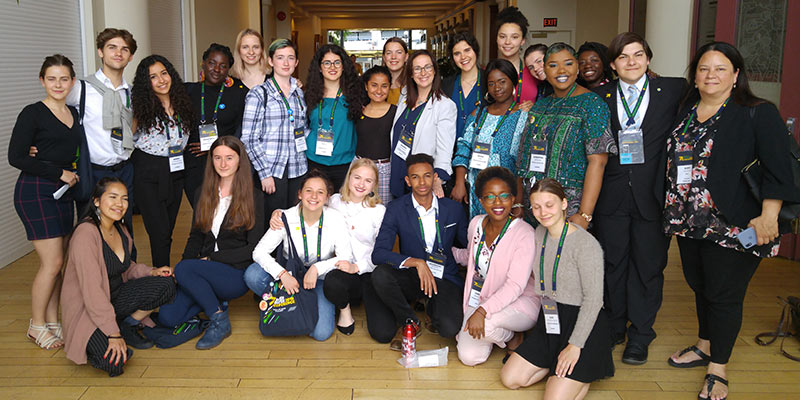 Powerful, personal and pointed messages were shared by nearly 20 young women from Pearson College UWC at the Education and Diversity: Forces That Unite session during the recent Women Deliver global conference in Vancouver.

As part of Pearson’s theme of Women’s Empowerment, students and new alumni, “officially” began working on this theme early in 2019 as a lead-up to participating fully in the conference that drew thousands of people to downtown Vancouver. Pearson’s representatives, both female and male, not only attended a variety of sessions during the conference proper but also, with the support and guidance of President and Head of College Désirée McGraw and Executive Coordinator Valerie Colas, hosted the 5 June session in the Canada Pavilion near the conference locus.

Through a combination of individual and small group-crafted testimonials, spoken word presentations and dramatic vignettes, Pearson students and new alumni shared stories of their lives and experiences to speak to the need for more and better education of girls, boys, women and men around subjects as searing and timely as sexualized violence to harmful and oppressive cultural practices to sexual and reproductive health.

While presenters dealt with topics as broad as the need to support greater gender balance and accessibility in STEM, for example, many of the testimonials were personal and emotional – stories that they own and that they have the right to share as they so determine. Individual presenters spoke of misogynistic practices that they confronted within their own families and home societies, ingrained and unconscious sexist attitudes and practices which have directly disabled their abilities to acquire an education as well as physical and sexual violence perpetrated upon those who were close to them.

With two-thirds of the most recent student cohort at Pearson identifying as female, the messages could not be timelier. The reaction from guests – mostly conference attendees including special invited guest Sophie Grégoire Trudeau – was thoughtful, with many interacting with Pearson representatives after the presentations.

Grégoire Trudeau, recipient of the 2013 UN Women National Committee Canada Recognition Award for her contribution to human rights and a high-profile activist for positive, affirming initiatives such as Plan Canada’s “Because I am a Girl,” also shared words about her own journey of bringing awareness of gender equality, mental health and advocacy for girls and women’s rights. A mother of three, Grégoire Trudeau is married to the Prime Minister of Canada, the Rt. Hon. Justin Trudeau.

Preparing and presenting their own stories was only part of the Women Deliver experience for the Pearson party. Participating in several plenary and workshop sessions, as well as fully embracing the opportunity to meet women and men from all over the world working for gender equality and women’s rights was part of this unparalleled experiential education opportunity.

As one new alumni participant reflected, “Women Deliver was exciting and life-changing. It was one of the moments when you can almost look forward into the future and see how much the conference has impacted your life. I met people directing projects in WHO, CEOs and NGO workers who I now have the personal contact to and can always find an exciting internship or project to be involved in. Really, the world just broadened a bit…or a lot!”

A Pearson student added, “Women Deliver was an eye-opening experience. At times it discouraged me, specifically when I heard some of the deflating, but realistic remarks from some of the speakers. However, I would say that realism has fueled my fire to continue to fight for women’s empowerment.”