On a special day, before a full house in the McConnell Theatre, Chief Russell Chipps of the Sc’ianew First Nation and Elders Rick Peter and Henry (Hank) Chipps officially celebrated with the campus community the gift of new SENĆOŦEN language names and artwork for five student dorm houses.

“The Sc’ianew community are People of the Salmon,” said Chief Chipps at a ceremony hosted by Vice President Ty Pile that included all 200 students as well as campus faculty and staff. “Together with our families and friends in all Coast Salish Nations, we honour the renewal and determination represented by the salmon in the Salish Sea and the rivers that run to those waters.”

“We live, learn, work and play on the traditional territories of the Sc’ianew First Nation,” said Head Craig Davis. “Our predecessors at Pearson built friendships and learned from our friends in the Sc’ianew community for nearly five decades and today, with gratitude and humility, we receive the gift of new SENĆOŦEN language names and artwork for each of our five student residence houses.” 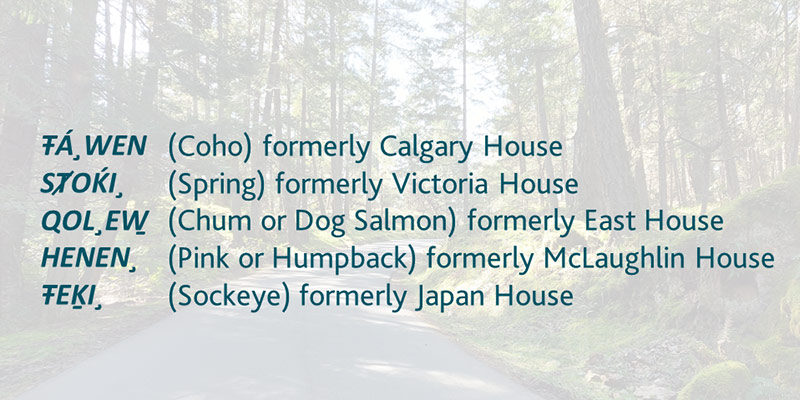 “Knowledge of, and centuries-old familiarity with, the land, water and local ecosystems acquired by First Nations peoples guide and help us build upon the work we have developed – such as our Marine Science course, Race Rocks ecoguardianship and outdoor leadership initiatives,” said Davis.

He added renaming residence dorms is one of many steps on the College’s journey of reconciliation informed by an Indigenous Reconciliation Action Plan created with cross-community input and support and guidance from Sc’ianew. The plan — based on four principles: Indigenous-led, Truth Before Reconciliation, Commitment and Respect, Shared Values and Shared Understanding — outlined a series of action items being implemented at the College.

These, Davis noted, are embedded in the development of an additional new curriculum pathway option – the Climate Action Leadership Diploma – for implementation as early as this coming fall, will include four terms of Indigenous Perspectives on the Environment courses developed on conjunction with Royal Roads and Vancouver Island universities.

Initial designs for the salmon were created and gifted to the campus by Chief Chipps and shared with the College’s Reconciliation Action Plan Working Group. Chief Chipps consented for his designs to be workshopped and transformed through student, faculty and campus community input to adapt and create the final form of these new visual identities which embody both Sc’ianew and Pearson visual elements in harmony. These were then approved by Elders Rick Peter and Henry Chipps.

Each version utilizes the overarching salmon theme with characteristics and colours unique to each house and acknowledges the ecosystem and elements of campus land and water, including the sea, the land, the sky, the sun, and the moon. An egg-sack within each salmon contains 40 eggs (representing the number of students living in each house) which is cradled by two hands, symbolic of Houseparents who hold and care for students during the school year.

The prominent house signs were manufactured in wood and are being installed this month. Students who returned and were new to the Pearson campus at the beginning of the 2021-22 school year have enthusiastically and proudly embraced the SENĆOŦEN language names.

“This is both a celebratory and a solemn moment for us at Pearson,” said Davis. “We celebrate this as one of many steps along our reconciliation journey with the guidance of our neighbours and friends. We also reflect upon the resilience of Indigenous peoples here and around the world and we thank them for their stewardship of the lands and the places we live upon and honour.”

Chief Chipps Welcome to the Land