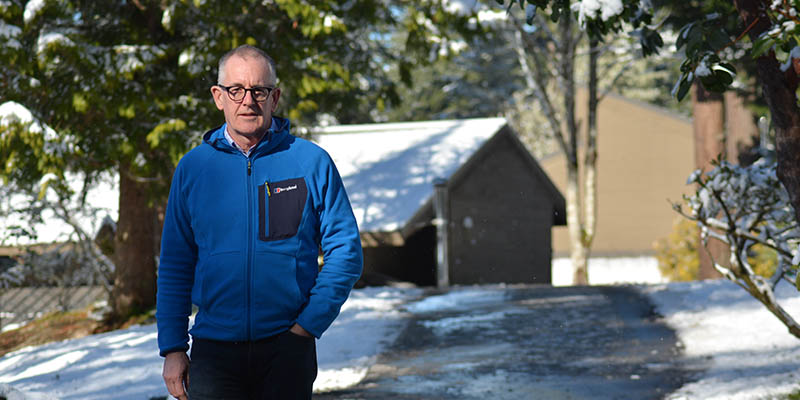 Making the switch from heading up your own financial services organization to designing and building landscape gardens in the Japanese custom might seem like a jarring career transition but alumnus Richard Wise (YR 1/1976, UK) focuses on a key principle that continues to serve him well.

“I’d like to think that, both in my business career and in my landscape gardening career (one he took up with a passion after he sold his business), one thing I absolutely took away from Pearson was the value of diversity,” said Wise during a recent visit to campus.

“I would deliberately build, I would still build, when I’m putting a team together, the most diverse group of people I could possibly find because I think – I know from experience — that diversity brings strength. That’s been a consistent them throughout all my working life and I like to think that’s been a competitive advantage for me.”

Wise, a Pearson College UWC Board member from 1995 to 2001, and a previous member of the UWC International Board, was invited to campus to share his business knowledge and life insights with students as well as senior leaders and the entire leadership team. He summarized his approach to success in working as a team in five key points.

“Trust – get to know people and understand each other’s strengths…to establish trust. Secondly, understand that conflict is important – not hostile conflict but respectfully discussing how we best work with each other.”

Commitment to the task, accountability for one’s actions and ensuring that you are not letting your colleagues down and finally, the importance of results is critical – “measuring your outcomes against those goals by which you hold yourself accountable.

“I think, at the end of the day, it’s all about people and it’s all about bringing people together with common goals and common purposes and building highly-effective teams,” emphasizes Wise. “And, without a shadow of a doubt, most of the skills I learned – the foundations of those skills were built at Pearson College – they were built around the conversations in the dayrooms, the conversations in the common rooms, the discussion and the debates and the arguments – including the passionate arguments.”

Another life lesson Wise suggests came from his time at Pearson as one of the “founding members” in that first year of operations is the philosophy of relentless innovation and reinvention.

“Relentless innovation was one of the terms I put into my business because it gave a sense of movement, a sense of change, a sense of doing new things,” added Wise. “The language (and the philosophy) gives that sense of, ‘let’s not sit back, let’s not be complacent, let’s question, let’s do what we do next because the world around us is changing all the time.’

“In my business experience, the organizations that sat back and said, ‘okay, that’s fine, we’ve arrived;’ they are the ones that lost…relentless innovation gives a sense of action, movement, change that I think are immensely beneficial to an organization.”

At first blush, that statement might appear at odds with an institution like Pearson College UWC that places a great deal of importance on history, tradition and recognizing that the journey you’ve been on helps you understand where you are going. But Wise does not see it that way.

“I think if you talked to the Year 1s, they would hope that their legacy was that every year would come in and ask, ‘why are we doing it this way?’

“To question, to reinvent, to re-evaluate – that is absolutely an important part of the Pearson experience and I encourage the students just to look at everything – lay it all out on the table and say, we understand why this was done in the past, it made sense then, does it make sense now?

“It’s a case of restlessly asking the question and I think that’s a fine legacy to leave the next generation.”

Wise’s message fell on receptive ears, both with student and staff audiences. Students are, of course, at Pearson because they want to succeed in changing the world – whether at a micro or a macro level — for the better. The College, while respecting tradition and enlightened past practice, continues to move forward with initiatives ranging from campus renewal to new and genuine interaction with our neighbouring communities to returning to a 200-student enrolment as part of a forward-looking Strategic Plan.

As part of the cohort that literally built the College, Wise recalled how far this institution has come and how great it’s potential.

“I remember arriving very late at night, it was dark, I was jetlagged, not sure where we were – very, very tired. And there were no beds for us!

“I remember the delivery truck being right behind the bus that brought us to College. So, my introduction to Pearson was something like:  taking my suitcase out of the bus, picking up wood and mattresses from the truck behind and walking up to the College and starting out to busily build beds.

“Because, if we didn’t build beds, there wouldn’t be any place for us to sleep that night. I think after we built some beds and moved our suitcases around, another truck arrived with all the tables and chairs for the dining room and so, in the early hours of the morning some of us built the tables and chairs and put them out because if we hadn’t done that, there wouldn’t be any breakfast.

“It was a very good way of binding together a group of diverse students because we simply had to do this stuff. And, as a unifying thing, it’s hard to think of anything better than that!”