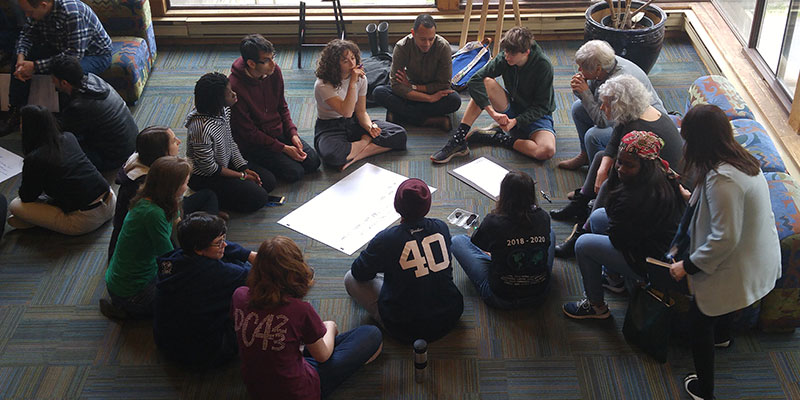 As the academic year — for students, at least — began to build to a climax of IB exams and end-of-year activities, another innovative process to renew the College’s educational program got underway in earnest.

“The initiative springs from, among several other factors, our Strategic Plan 2020,” said Heather Gross, Deputy Head and Vice-President Education and Programming. “One of our five overarching goals identified in the plan’s Roadmap to the Future is to: ‘Inspire students to be responsible global citizens by fostering innovative programming, cutting edge curriculum, leadership in experiential learning, IB excellence and creativity, and Indigenous programming and reconciliation.’

“So, our challenge is, how to offer the most creative and innovative programming possible while continuing to align with the UWC mission and ensure that we are nimble and responsive to the academic, experiential and other educational needs of our unique global student body,” added Gross. “We want to be a global innovator in leadership education now and into the future.”

With strong support and involvement from President and Head of College Désirée McGraw, Gross, together with Faculty colleagues, initiated and shepherded the first step in a six-month process to develop and confirm Pearson’s Educational Vision and Strategy.

Adds Gross, this involves drawing input from representatives across the entire Pearson community to, ‘’clarify what we aim to achieve, how we achieve it, and how we measure our success…to clarify and communicate the things we agree are special and significant about Pearson now and into the future.”

Gross added, “We’re engaging with Innoweave in a strategic consulting opportunity funded by the McConnell Foundation for non-profits and educational institutions to have coaching support on clarifying our intended impact and our intended beneficiaries – asking the questions, ‘so, what are we doing and who are we doing it for?’

The process guided by Innoweave, which has worked with educational and other institutions such as the Early Childhood Educators of B.C., L’Arche Canada and Physical and Health Education Canada, will help the community work together to achieve clarity about the impact we seek, creating a starting point for developing and assessing potential pathways for the future and giving better focus to the capabilities we need to develop to implement the vision.

“We want something more specific than a mission statement. The process is really going to give us what is called an intended impact statement and a theory of change. The is being basically a hypothesis about how to generate that impact in our environment — why we think what we do is making a difference in the world and who we’re working with.”

The exploratory process is involved and multifaceted. Pearson students from Years 44 and 45 — as well as McGraw, Gross and all members of the leadership team, as well as Faculty, staff and other campus adults — took the opportunity to contribute perspectives on the current and future vision for education programming at Pearson during an April Village Gathering.

From there, in response to a call for participants, about 15 individuals formed a working group. “It’s a very robust group and a good cross section — staff, faculty, alumni, residents, students – meeting almost every second week (with fewer gatherings during the summer months) and working well into the fall with Innoweave’s Shazeen Virani, an experienced coach and facilitator who has worked with many organizations such as the Aga Khan Foundation.”

Gross noted that the expected outcome will include the College’s intended impact statement and its theory of change that will help inform an educational vision statement that will take Pearson, and future UWC students, into the future.

This community commitment is complemented by wider College and UWC initiatives. Earlier, in Pearson eNews, we wrote about the four-year Harvard UWC Impact Study that will enable the movement to improve its educational program with a view to strengthening the UWC mission as well as creating a body of work that is expected to be of interest to other educators around the world.

“One of the things we’re also contributing to the UWC-wide conversation about our educational program is the idea of a ‘UWC diploma,’” added Gross. “That’s being coordinated by the UWC International Office and has included consultations with educators at UWCs and collaborations with all school Heads and Board Chairs when they were hosted here at Pearson in March 2019.”

“The discussions taking place on campus and around the UWC worldwide network about the type of education program we offer now and should offer in the future are robust and invigorating,” added McGraw. “As we stated in our most recent Strategic Plan, ‘Innovation is at the heart of our programming…we can and should be once again at the frontier of innovation in experiential education if we are to equip a new generation of leaders with the skills and competencies to exemplify UWC values.’”