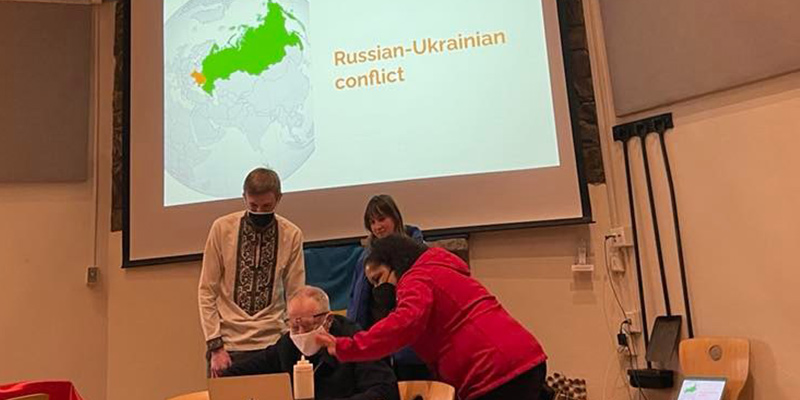 Editor’s Note: Last week, Craig Davis shared observations on campus reaction to the Russian state’s military action against Ukraine in this thought piece. Students at Pearson and from across the UWC movement, have taken up the challenge of moving past the online firehose of factual, semi-factual, mis- and disinformation about the conflict to hear and understand perspectives from students whose homelands are directly threatened by this conflict that has become combat.

By Craig Davis, Head of College

The session predominantly focused on the historical context and centuries-old tensions between Ukraine and Russia, however, with the recent invasion of Ukraine by Putin’s forces central in the minds of the entire international community, personal reflections on the current situation on the ground were also shared.

One amongst many strengths of the United World College movement is the nurturing of a culture that can bring together Russian and Ukrainian students to contribute to a session addressing a conflict between those very same nations. Pearson will always emphasise our ability to separate the personal national identity of our students from the current political regimes that may be in power at any particular moment in time.

This is also happening across the UWC movement and last night on our campus, this was navigated expertly by the students as they focused on the values that we can all relate to regardless of our own cultural and national contexts; namely international law, agreements forged through multilateral bodies such as the United Nations, the principle of respecting cultural and legal self determination and our commitment to fact checking and objectivity during times of conflict when propaganda, bias and agendas can cloak information found in social media, websites, news channels and editorials.

Given the challenging context, the presenters were able to honour our UWC commitment to peace, intercultural understanding and conflict resolution whilst meeting the need to call out injustice, the contravention of international law and challenges to sovereignty and self determination when it occurs.

Signalling solidarity to Ukraine is not an empty, performative gesture taking one side over another, but rather a strong signal of support for the principles of international law and self determination in the face of clear aggression. As the presenters emphasised, these are principles shared by Russians, Ukrainians and the wider UWC community and it is appropriate to identify injustice wherever it may occur through any nation state or regime.

The session was extremely informative and represented a full, deep dive that gave our entire community a balanced and detailed understanding of the context. Sources were cited and encouragement was made to explore further the facts to enable all of us to be better informed in the face of any justifications being made to invade a sovereign state.

The students generally wanted to support the emotional toll this takes on those students most closely affected by this. The impact on our Ukrainian students and their families is clear but we were also reminded by Rita that the toll is heavy too on those Russians protesting against the invasion within their own country.

There is fear and concern in all quarters and the solidarity expressed by the Pearson community was strong. Resources and channels were shared to enable students to continue to find structured ways to express solidarity. This includes connecting to both Ukrainian and Russian communities in and around Victoria and joining organised events being supported by the Canadian Ukrainian community locally.

We will continue to support our students and their need to express solidarity and call out clear examples of injustice. We would expect nothing less of United World College students