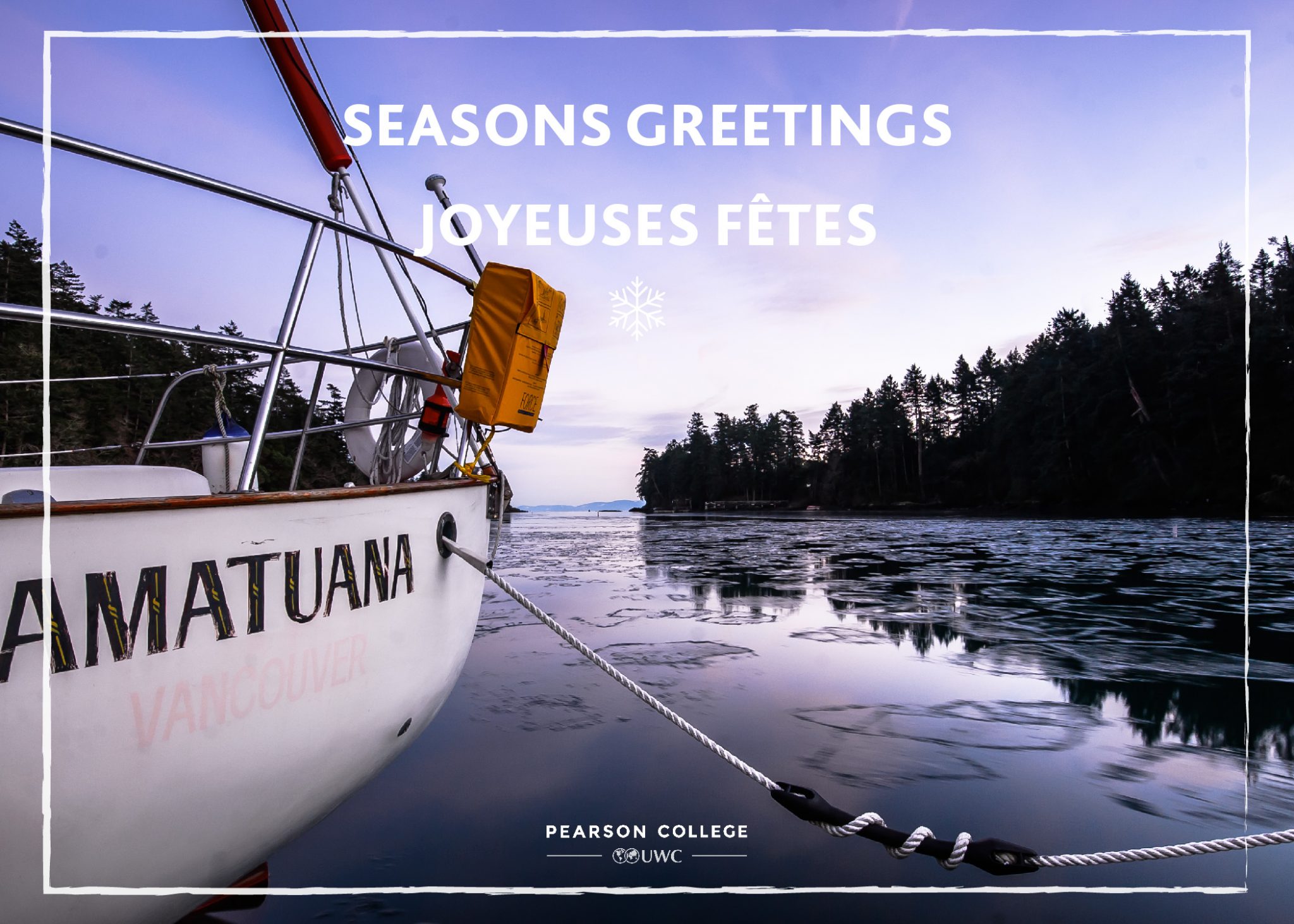 As the winter solstice rapidly approaches, here in the northern hemisphere the night sky appears darker while the myriad stars glitter more brightly than ever.

Those individual stars remind me of the thousands of students, alumni and members of the Pearson College UWC community, each of whom casts their own light on the world that surrounds them, while the constellations represent some of the major events that have brightened the past year.

Among those bright stars are the members of the Year 43 cohort who have spread out across the planet, from Australia, to Brazil, Greenland, Israel, Sénégal, South Africa, Ukraine and many other countries to study at prestigious universities, complete military service in their home countries, or fill a gap year with community service. We are so proud of you and your endeavours!

There is not enough room here to single out the achievements of all our Pearson stars, but I must offer special congratulations to Linda Worden (YR 40, 2015/Canada, BC) who was recently named the 14th Pearson College UWC alumni to be awarded a Rhodes Scholarship! She plans to use her scholarship to pursue an M.Phil. in comparative social policy.

This fall marked the return to a student enrollment of 200 for the 2018-19 school year. I am deeply grateful to all those, both on and off-campus, across all faculty and staff responsibilities, who worked to ensure the curriculum and campus were ready to accommodate and embrace this return to the historic enrollment level. And, of course, special thanks to Ty Pile who oversaw the rebuild of McLaughlin House within an exceptionally tight time frame (90 days!) so that it would be ready to welcome the 2018-19 student cohort.

There have been many special events during the fall term. After an intense orientation, or re-orientation for second-years, week, many students kick off the year by taking to the outdoor stage during the annual Metchosin Day community fair. Other students and members of the Pearson community come out to enjoy the fresh air and fellowship and the opportunity to connect with the local community. For the first time in years, this early-September event was graced with heavy rain most of the day but this did not deter anyone from enjoying a day with our neighbours.

Also, in the first full month of classes, we kicked off our refreshed Global Affairs Speaker Series led by new Faculty member and Global Politics teacher Shefa Siegel. We’re inviting compelling speakers who are not only informing both our campus and local communities, but also are challenging all of us to better understand how our individual roles in living up to the UWC Mission can have a direct, positive impact on the planet. We love to share these sessions widely so, increasingly, we are working with student teams to livestream Global Affairs.

Faculty members Laura Verhegge and Christie Johnson are leading the new Coastal Biodiversity Course/CAS activity, as a way to ensure that more students – not only those in Marine Science and biology – have an opportunity to better understand and experience the amazing coastal ecosystem of this part of the world. Kudos to Laura and Christie for getting this first-time activity out on the water, so to speak.

October and November are busy months with students getting into the groove of their respective first and second-year curricula. These are the months during which we are visited by many university recruiters from around the world who are attracted to this campus because of the high calibre of Pearson students. University recruiters meet with small groups of students or individuals and talk to them about pursing further studies at their respective institutions. In many cases, they are also outlining the scholarships and financial assistance that may be available to Pearson scholars who carry the UWC message with them to higher learning.

Education at Pearson is complemented by both service to and learning in the wider community. CAS (Creativity, Action and Service) Week in late October saw many of our students setting out on educational adventures and experiences with organizations such as the Inter-Cultural Association of Greater Victoria, the Victoria Brain Injury Society and the Braehaven Assisted Living facility on Salt Spring Island. Others took the opportunity to share their experiences with local public schools and to train to for a certificate in mental health first aid. Less urban CAS Week projects included a group that hiked on the Cape Scott Park North Coast Trail and another that paddled canoes and wilderness camped around the Broken Islands Group.

We were pleased to host Minister of the Environment and Climate Change Canada Catherine McKenna on campus for a brief visit in November during which she took the opportunity to interact with students as well as members of both the Pearson and local communities on a short hike and during a follow-up question and answer session. Students and guests took the opportunity to ask tough questions of the minister about the federal government’s record on environmentalism. Min. McKenna was forthright and open in her responses and the audience appreciated her candour.

A few days later, the College’s Annual General Meeting and board meeting were both ably chaired by the Hon. Anne McLellan in snowy Montreal. Alumni Relations organized an excellent Storytelling Soirée outreach initiative that featured four Pearson alumni and an enthusiastic audience. At the AGM and board meetings, I was pleased to recognize the dedication of our volunteer Board of Directors and offer special thanks to four dedicated individuals who stepped down from the board: Chuck Burkett, Michael Dingle, William Kaplan and Samer Sarraf, all of whom have served on the Board for six years, as well as former Chair Tony Macoun, who in addition to his guiding role of Chair, was an invaluable mentor a from the moment I came to Pearson, particularly given his extensive experience as a head of school, including Pearson College from 1986-1993.

Just a few days ago on behalf of Pearson College, I was pleased to sign a Memorandum of Understanding with Chief Russ Chipps of the Beecher Bay (Sc’ianew) First Nation and Mayor John Ranns of the District of Metchosin. Beecher Bay is in the midst of negotiating a land claim treaty settlement with the Government of Canada. Pearson and Metchosin are not part of a formal treaty negotiation process, but this MOU allows us to have a voice in developing a common vision for the lands adjacent to and near the campus.

As Chief Chipps said, “This will lay the foundation for strategic planning based on community input and, importantly, reconciliation.”  At the signing, I added, “The goodwill and spirit of collaboration by all parties to this agreement demonstrates our mutual desire to honour the land on which we all live and, in our case, on which our students from across Canada and around the world learn.” Please feel free to review the MOU and accompanying news release.

As this term draws to a close, I want to thank parents and guardians for entrusting your exceptional young people to our care. The entire Pearson community and I strive every day to fulfill your expectations that their stars will glitter ever more brightly as their intellects, talents and contributions continue to thrive and expand.

As always, there is so much more to say and tell! I invite – and urge — you to follow our news on social media where you will find many stories of the day-to-day events and the people of our community.

On behalf of the entire Pearson community, I extend to you and to all supporters and friends of Pearson around the world warmest wishes for a happy holiday season and a wonderful New Year of 2019.