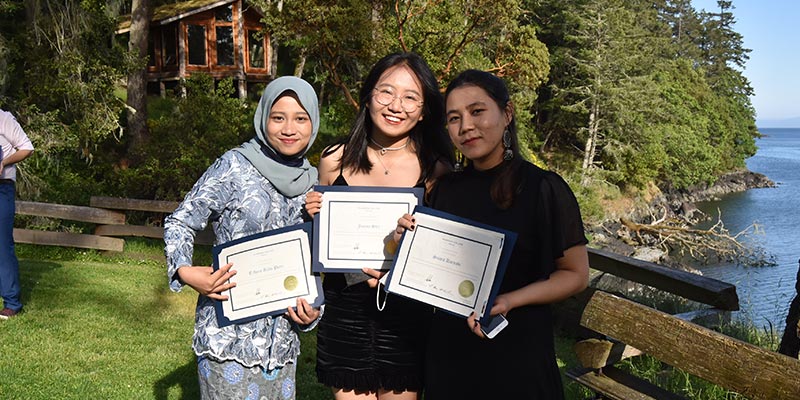 Again, this year, students who were completing their on-campus Pearson College UWC experience were in high demand at post-secondary institutions the world over with more than 120* universities and colleges extending offers to graduating Year 46s and a handful of earlier-year students completing their individual gap years.

Offers to Pearson students came from at least 52 American schools, 24 United Kingdom universities and colleges, 24 Canadian post-secondaries, 12 European schools (excluding the U.K.) and 11 other institutions around the world.

“This year in particular, we celebrate the resilience and character demonstrated by all of our students but particularly our Year 46 graduating class,” said College Head Craig Davis. “They have pushed through all of the challenges to create a unique and positive Pearson experience in spite of overwhelming COVID restrictions.”

And, all things considered, suggested Pearson College UWC Universities Counsellor and Faculty member Becky Halvorson, the fact that university acceptance offers to Pearson students this year did not differ significantly from previous years is positive.

“In many respects, including where students will be going, there were many similarities between this year and last year’s university offers to Pearson students – and that’s a good thing,” especially considering the many disruptions associated with the COVID pandemic in both 2019-20 and 2020-21.

Halvorson works with Academic Services and Student Records Coordinator Donna Grunder and ultimately, with all faculty members, advisors and all adults on campus ranging from House Parents to Maintenance staff, to help support graduating students in understanding their options for further education in their respective fields and for understanding the intricacies of standardized testing, admission requirements, scholarships, financial assistance and the constantly evolving student visa situation in different countries.

In turn, Halvorson also works with universities and other institutions in helping their admissions staff match with Pearson students. “Like last year, universities were again going the extra mile. They were responsive in answering questions, smoothing out any bumps and accommodating (individual student) needs.”

Universities stepped up in many ways, such as more video calls with a student and sometimes also involving parents, universities advisors and (Halvorson). “A successful conversation like that can help ‘move the world’ (in terms of access and student success.)”

Of course, as Halvorson added, it helps that, “overall, our students are highly sought after. Pearson (and all UWC) students are in demand because, “universities recognize the high calibre of students attracted to the challenge of obtaining an IB Diploma while undertaking the full UWC experiential, service and academic curriculums.”

She noted that there were no large swings in where applications were sent, suggesting that students were making decisions based on their visions, not simply COVID considerations. That said, there were some modified choices made based on where students thought they would be permitted to go in terms of pandemic-era visa and travel rules.

Other post-secondaries continue to recognize the promise and potential of young people from around the world who attend UWC schools from challenged backgrounds and circumstances.

For example, Halvorson noted the new Huron – UWC Global Leader with Heart Award available to Pearson and other UWC students enrolled at a UWC School on a full scholarship, which demonstrates a level of financial need that would otherwise prevent a student from pursuing an education at this University College affiliated with Western University in London, Ontario.

Again, this year, U.S. institutions account for a significant ratio of university offers due in no small part to the ongoing and unprecedented generosity of philanthropist Shelby Davis. The Davis UWC Scholars Program is known as the world’s largest, privately funded, international undergraduate scholarship program, supporting diversity by partnering with 99 U.S. universities and colleges and supporting more than 3,100 students from 164 countries.

While about 52 U.S. institutions (including multi-campus universities) made offers, not all Pearson students who opted for U.S. universities did so with a Davis Scholarship.

With about 30 institutions outside North America extending offers to students, Pearson alumni should continue to be well represented at universities around the world. Come the new academic year, expect to hear about alumni achievements from schools like Imperial College London, Bocconi University, Leiden University, Minerva University, Ritsumeikan Asia Pacific University, UNED (Universidad Nacional de Educacion a Distancia) and dozens of others.

Halvorson noted that taking a gap year or a deferred post-secondary entry after Pearson is not uncommon, given the College’s demanding curriculum and 2021 is no different in terms of the number of students choosing this option.

“Some students are using a gap year or a deferral to rest and recover from this (pandemic year) and to spend time with their families while others are fulfilling national service obligations.” With COVID protocols not permitting trips home during the extended winter break last year, many students did not see their families for up to 10 months.

And this year, when more families were challenged both emotionally and financially, Halvorson reiterated that it was important to remember the responsibility of the College and the UWC movement to work with students in helping them find a steppingstone beyond their individual United World College experiences.

*This figure is not necessarily complete as some students may not inform the College of their acceptances while some acceptances will not be finalized under after this publication.