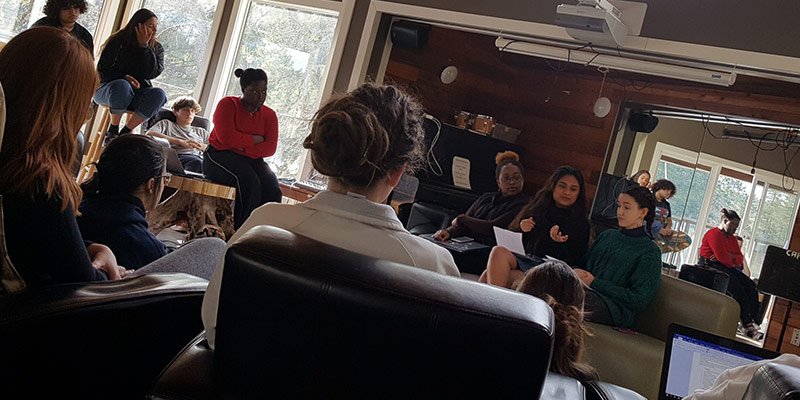 Pearson College UWC will have a strong presence and, more importantly, strong voices at this June’s Women Deliver global conference in Vancouver thanks to the school and President and Head of College Désirée McGraw’s commitment to a programmatic theme of Women’s Empowerment from March 2019 to March 2020.

“Each student will be creating her or his own conference plan to guide them through what speakers they want to listen to, what workshops they wish to attend,” says Community Engagement Officer Julia Norman. “They will also set goals for what they want to achieve and what they want to improve on. During each day of the conference they will do that individually or in small groups and then we’ll debrief at the end of each day as a larger group.”

Norman, who is the coordinator for this year’s Women’s Empowerment Programmatic Theme on campus, has worked in the field of women’s empowerment and youth engagement for nearly a decade. She says she is, “excited to be bringing such a diverse, authentically invested group of young people to Women Deliver and to work with them to see what can be ignited from this global conference.”

Throughout the academic year, most recently, leading Project Week activities on this theme, Norman has worked with the 23 Pearson students, representing a mix of first and second-years and genders, who will be attending the June 3-6 conference. She, together with Désirée McGraw and Executive Coordinator and Assistant to the President Valérie Colas, are expected to accompany the student delegates.

“The students are pretty clear on what their goals are – for example, many of them want to develop a network, especially within their home countries,” adds Norman. “They are also aiming to find delegates from around the world interested in specific issues and hearing about the successful ways people are working on these.”

While previous global Women Deliver conferences have been billed as, “the largest conference(s) on the health, rights and wellbeing of girls and women in the last decade,” the Vancouver conference is expected to draw thousands of delegates from around the world with a roster of notable and influential guest speakers drawn from NGOs, governmental organizations charitable organizations and the private sector.

Pearson delegates hope to lead two side events — featuring one or more of the prominent speakers at the conference – to the main conference but, at the time of writing, details had not yet been nailed down.

As well, major global conferences often inspire parallel conferences – some aligned with the main conference, some featuring a distinct mandate designed to flag issues of concern, such as economic and other barriers that may make it difficult for voices of marginalized communities to be heard in a mainstream conference. For example, a parallel Feminists Deliver conference is being organized to run concurrently with Women Deliver and Norman notes that there is interest on the part of Pearson students in exploring intersectionality discussions slated for that forum.

Main, aligned or parallel conferences and discussions all allow opportunities to build knowledge and networks and Norman acknowledges the support given by the College.

“It’s important that we as a school are investing in women’s empowerment education,” says Norman. “The fact we are dedicating a full Project Week and the Capstone Week (at the conference) is significant.

“For students to have exposure at that level, it may be their first conference ever and maybe the only global conference of that magnitude that they’ll ever go to — I think it’s a tremendous opportunity.

“It’s also important that (Pearson) is able to be nimble like this for the benefit of our youth leaders particularly if a nearby event like Women Deliver aligns with our values as a global school aspiring to have global conversations.

“Some of our students want to go home and do workshops in their countries on these issues – they want to be able to connect with people working in these (industries/sectors/issues) and they don’t otherwise have a lot of easy access to these networks. Attending this event is going to give them a real opportunity to spark meaningful involvement,” Norman adds.