I’ve been on protest lines since I could walk 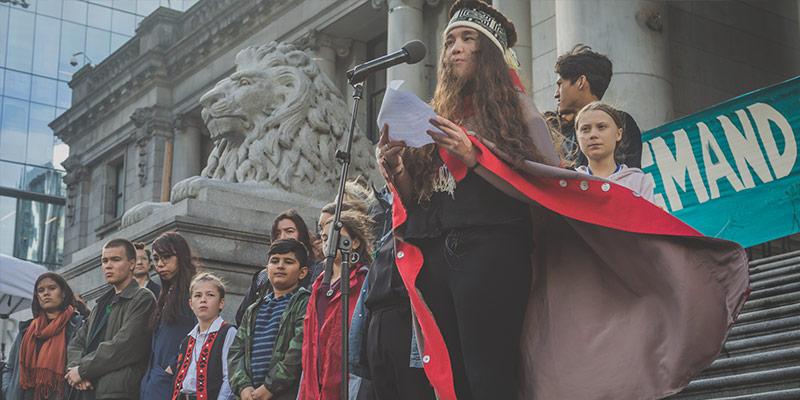 Applying to UWC, being accepted to a UWC school and finally graduating after two years of studying hard and pushing yourself both mentally and physically shows enormous grit and determination. But every so often, students remind us that they arrive on the Pearson campus with a track record of accomplishments and causes that they are deeply passionate and which they pursue alongside their full academic and activity schedules.

Haana Edenshaw (YR 46/2021, Canada-BC), a young woman from Haida Gwaii – an archipelago off the B.C. coast —  is actively honouring and supporting her Haida Nation heritage as well as fighting against climate change. Earlier this year she spoke to the United Nations about the Year of Indigenous languages, Indigenous self-determination and the link between language and land. Last month she, along with Swedish climate activist Greta Thunberg and other engaged youth, spoke at the Rally for Climate Justice in Vancouver.

Haana told us how her parents’ enthusiasm for practising the Haida culture and her love for the natural environment inspires her. “I’ve been on protest lines since I could walk,” she explains. “I have always admired the dedication my entire family shows towards practicing our culture and protecting the lands we live on,  she adds.

“Our language and culture is the land. Our ancestral knowledge of the land has led ours to be a culture and ethic of stewardship for the environment.”

Haana added that she is also inspired by another important person in her life.

“My grandpa helped to create the Haida Heritage site and Gwaii Haanas National Park Reserve. Without our community protecting the land from being logged, we wouldn’t be able to see trees that are up to a 1,000 years old in the park.” Being reminded of what he was able to achieve encourages her to continue the fight against climate change and to protect the environment.

Haana also understood that climate action is a global as well as a local fight. She contacted Our Children’s Trust, a worldwide organization which gives young people who will experience the full effects of climate change, a voice to favourably impact their futures and empower them to secure their legal right to a safe climate. Haana, together with 15 courageous co-litigants from Canada, filed a lawsuit in the Federal Court of Canada, alleging that “the Canadian government causes, contributes to and allows dangerous levels of greenhouse gas emissions, and is thus responsible for the specific, individualized climate change impacts they are experiencing.”

“I am a plaintiff in this lawsuit because if nothing changes soon, my siblings will never feel cultural security, and will have to wonder if ours is the last generation to be able to access our lands and waters for our cultural needs,” she said in a speech delivered when the suit was filed in October.

They also organized a press conference with the David Suzuki Foundation, which was followed by a Fridays for Future climate strike, planned by the teen-climate group “Sustainabiliteens” at the Vancouver Art Gallery.

For Haana, the highlight of this event was certainly when Greta Thunberg the Swedish activist joined them.

“It felt powerful to have Greta Thunberg’s presence there to support the significance of this event”, Haana said. “Moreover, I was blown away by the maturity the other co-litigants showed although some of them were not older than 10!”

Clad in traditional regalia of the Haida people – dress which was banned by the Canadian government for many decades —  Haana proudly delivered a speech at this event, showcasing her commitment to the cause and demonstrating the power and growing voice of Indigenous Peoples from Haida Gwaii and around the world.

“I feel very privileged to be part of the lawsuit against the Canadian government. Attending the village gatherings at Pearson, I listened to peers who shared the impacts that climate change has on them, but some of them aren’t able to speak their minds against their government.

She added, “The Canadian government is violating the rights of youth by constantly taking away our resources. First it was the oppression of Haida heritage and now they are damaging the environment. Without our land, my people can’t practice our culture,”

The actions of this courageous youth underline the vital message that we are in a climate emergency. “My story is just one example of how climate change is already affecting Indigenous youth all over the country. It is no longer a future problem. It is affecting me and countless others right now.”

In terms of the lawsuit, Hanna is eagerly awaiting a response from the federal government after which, the co-litigants and their legal team will plan the next steps.

Armed with these experiences, her determination to take action and backed by dedicated family members, this young activist’s story is just getting started.

Haana, we are are looking forward to hearing and witnessing more of your incredible journey.