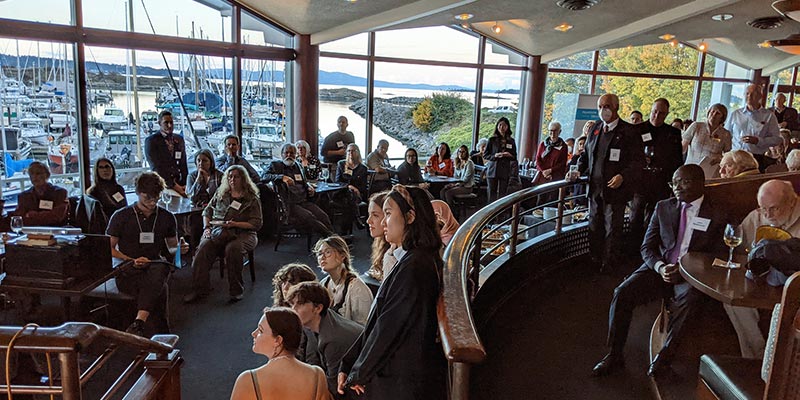 Join Us! – Celebration Marks a Milestone in Pearson College UWC’s $40 million Renew and Re-found Campaign for a New Era of Service

Pearson College UWC last night welcomed nearly 100 guests to an event that officially launched what will be the home stretch in a multi-year Renew and Re-found Campaign to raise $40 million. This campaign supports student scholarships and modernizes the learning and living environment of our campus along Pedder Bay on the traditional territory of the Sc’ianew First Nation. 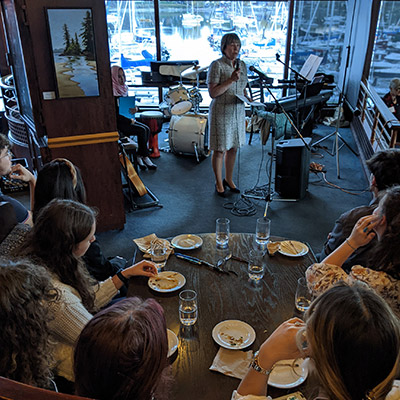 “’Join us!’ isn’t just a slogan, it’s a genuine invitation for everyone to discover what a difference their support can make to this campaign,” said Pearson Board Chair and Campaign Cabinet co-chair, the Hon. Anne McLellan. The celebratory evening was hosted at the Victoria-area Oak Bay Marina Restaurant, whose parent company is a College and campaign supporter.

“This is truly a happy occasion, a day in which the Pearson community comes together in Victoria to celebrate how far we have come with the support of our worldwide Pearson community of alumni, supporters and friends and how far we are aiming to go as we approach the College’s 50th anniversary,” added McLellan, speaking to an audience of leading South Vancouver Island and Lower Mainland community leaders.

Guests at the live event were treated to the local premiere of a short campaign video (available on the campaign website) which featured several Pearson students who shared their stories of how scholarship support through Renew and Re-found supported them and will continue to support future students.

Students Vuk and Haseen, from Serbia and Afghanistan respectively, acted as hosts for the event while several other Pearson students, including a jazz ensemble and singers, shared performances throughout the evening.

Thanks to the generosity of more than 3,000 campaign supporters, the College has already raised nearly $33 million towards the $40 million Renew and Re-found Campaign goal, said President and Head of College Craig Davis.

“Campaign supporters have allowed us to more forward with intentionality to refurbish living and learning buildings that were built nearly a half-century ago, to provide scholarships for the passionate and committed young people from around the world who need an extended hand the most and, this year, to implement a world-leading Climate Action Diploma option,” he added.

“But we still have a ways to go. Meeting and, indeed, exceeding our campaign goal will help ensure we can continue to equip students with the tools, the knowledge and the enthusiasm to tackle the world’s biggest challenges.”

Davis, who shared a comprehensive update on campus and community events with the audience, encouraged all friends of the College to consider which one — or more than one — of the five main campaign priorities spoke to their interests and passions and to consider directing their support to these. 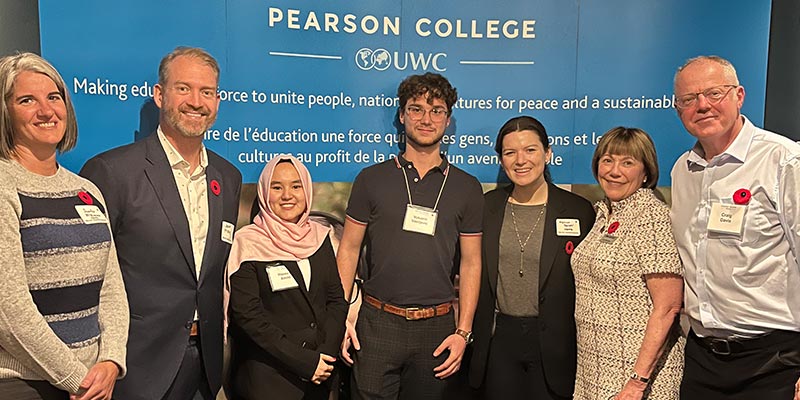 Each of the priority areas is highlighted in detail on a new campaign website that also introduces to the worldwide Pearson community several volunteers who have stepped forward to support Renew and Re-found by joining the Campaign Cabinet, led by co-chairs Anne McLellan and alumnus Paul Lumsden (Year 7/1982, Jamaica).

With more than 4,300 alumni across Canada and around the world, the College also hosted two virtual Renew and Re-found Campaign events earlier which drew alumni, supporters and friends from around the world who heard updates on student achievements, the progress of the initial Climate Action Leadership Diploma student cohort and recent and planned improvements to the learning and living environment on campus.

As Davis said during each event, “As we look ahead to our next 50 years, we are reaffirming our highest aspiration: to help young leaders and collaborators discover the transformative power of service to others that encourage them to become agents of meaningful change across the globe.”