An Ocean Odyssey from Kenya to Pearson and Back 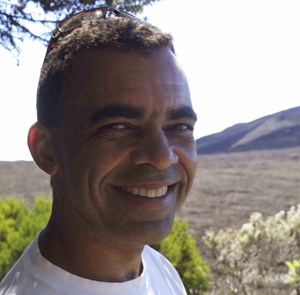 From the bracing waters of Pedder Bay to the warm waves of Kenya’s Indian Ocean coast, it’s been a long journey above and under the waters of the world for Kenyan marine biologist David Obura (YR 10/1983, Kenya).

Obura was recently back on the Pearson campus – between conferences in Bangkok and Seattle focusing on his area of expertise, coral reefs – to talk with students and host a screening of the documentary film Chasing Coral.

“I loved Pearson,” said Obura, a PhD who earned degrees from Harvard and the University of Miami. “Growing up in Kenya I was already very outdoors-oriented. I knew I wanted to be a wildlife biologist or some sort of photographer, so when I came to Pearson there was plenty of environment to deal with!

“I learned to dive here so that really got me into the ocean – I loved it, we did so much, diving expeditions and so on. This really started me down the line on working on marine sciences, for sure!“

As a coral biologist, Obura is passionate about the environmental impact of coral bleaching on warm waters across the globe. And, he’s adamant about the cause and its detrimental effect.

“Absolutely, it’s related to climate change. If you lose coral reefs, you lose a major part of the protein source for hundreds of millions of people who are, in many cases, poor – the loss of reefs leads to much higher food insecurity.”

Corals, he explained, grow a three-dimensional structure over reefs in ocean waters between about 30 degrees north and south of the equator. The structure attracts algae and other food sources for fish which in turn, rely on the shelter and the habitat provided by coral reefs. The sea life then becomes a source of nutrition for regional communities and countries.

Coral bleaching – which was particularly exacerbated by the big el Nino of 1997/98; one of the hottest years to date — is a stress response when waters are too hot.

“A lot of the work we’re doing now is linking reef health to food security, to the income and secure jobs that coral reefs bring in coastal zones, to tourism and, of course, right through to food, water supply and health,” said Obura.

For the past two decades, Obura has primarily worked through his East Africa-based non-profit foundation, Coastal Oceans Research and Development in the Indian Ocean (CORDIO).

“We started with Swedish funding back in 1999 as a response to the big el Nino and the mass die-out of corals,” he said. “A co-director and I have managed to sustain it…primarily sourcing international research grants.

“We have staff in Kenya but we work in partnership with universities, protected areas staff, other NGOs, and so on, in other countries of the region. We look for partners – we’ve been there for 20 years and we’ve built up some long-term partnerships in that time. There is also the global coral reef community that we interact with in terms of monitoring and conservation such as IUCN (International Union for Conservation of Nature), WWF and others.”

At the time of the interview, Obura was set to host a screening of Chasing Coral, which is also available on Netflix, on campus and he was looking forward to that. 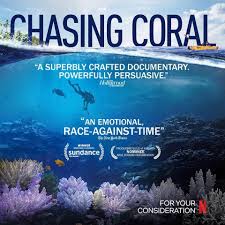 “I’m looking forward to seeing the reaction of students. The filmmakers ended on a very upbeat note – you have to give people something to work towards – but typically there is a lot of crying, sniffling during the movie.

“It’s very impactful – it’s a real, personal story. We did a screening in Mombasa a couple of weeks ago where the public could come for free after which we hosted a panel of experts – scientists and members of the community in tourism, government, etc. to talk about the relevance of reefs to the local area.”

Obura is a realist about what can and what can’t be done to stave off further damage to coral reefs in tropical waters around the world.

“It’s challenging…because many our countries are relatively low income, the ocean and reefs are not the first national priority. There’s a low capacity, low attention that can be paid to reefs and the sort of international conditions that are needed (for further protective actions).

“But for us, there is a fertile space to work in, to talk to (national) environmental ministries because it does support them and their mandates.

“We’re working hard in that space. There is a lot of interest but there is limited capacity and funding to move forward. I’m optimistic that we’ll have much better integrated management agreements between countries – a much more concerted effort between countries — I think that definitely will happen.”