Leaving a Legacy for Future Generations of Students 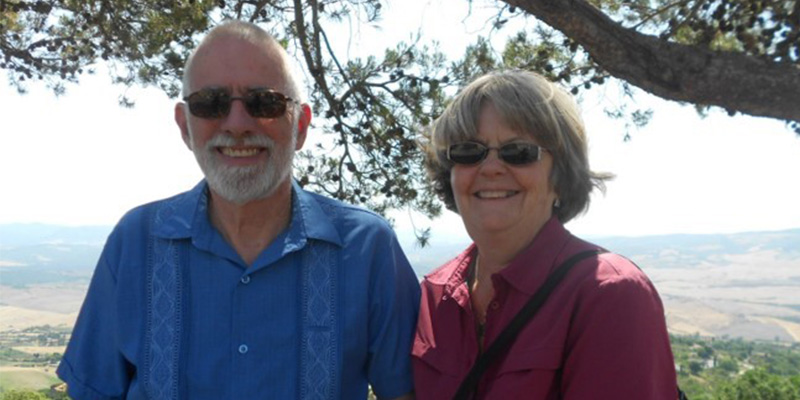 Community members, volunteers, global citizens, Pearson College UWC supporters, advocates and legacy-builders. These are just a few of the words that define Art Stephen Jackson and his spouse Gillian Jackson.

Art, eldest of six children and a long-time volunteer at the College, says he was taught by his mother Olive, who was herself a teacher.

“She instilled in us the virtues of giving back to the community one lives in and the value of education for youth to help them become the leaders and changemakers of tomorrow.”

The Jacksons, who live in the Victoria, British Columbia region, originally became involved with the College through their good friends Roy and Hilda who were Host Family volunteers for several Pearson students in the early 1980s. Art and Gillian were so impressed with the students they met through their friends that they decided to get involved.

Art added that there was another reason why his interest was piqued. “Around about the same time there was a ham radio station at the College (VE7LPC) and the College was looking for a new sponsor for this activity, so I volunteered!”

Thus began the couple’s long-term relationship with the College. Art recalls Gillian especially enjoyed hosting the students as she grew up with only one brother — nearly 10 years her senior.

Art has fond memories of those students who stayed with them over the years.

“Watching the students’ interactions, their determination and drive, their interest in the world, never ceased to impress us.”

He shared the story of two young men who stayed with them from different walks of life and seemed to embody the spirit of Pearson’s commitment to deliberate diversity.

One, a student from South Asia. seemed to come from an upper middle-class family and spoke several languages, including English, of course. His friend was from a small Southern Africa nation who, after receiving his first pair of shoes when he started high school, methodically carried them to and from school so he wouldn’t wear them out.

“These two young men came from hugely different cultural and economic backgrounds yet were the best of friends.”

That up-close worldview of the reality of the UWC mission and values in action and the knowledge that access to a Pearson education can help positively change the course of young lives encouraged Art and Gillian to support the College through financial donations now and, later, through a legacy gift.

“Though we’re not among the rich, we are fortunate that we have enough to live comfortably, travel, and more or less buy what we want, within limits of course,” says Art.

“We do not have children and our siblings are not wanting. We do give to charities regularly but realize that we could give a lot more and not strain our income by including Pearson in our wills and still manage to support our families.”

Art and Gillian both believe that the future will be in the hands of today’s young people. The international cooperation and understanding fostered at Pearson is crucial to this and has imprinted strongly on the Jackson’s hearts. As Art says, “Lester Pearson College is not just a college – it’s ‘our’ College.”

The couple hopes their legacy gift will not only support the College but also open the eyes of and expand the horizons for generations of students to come. They believe strongly in the UWC mission and vision of the College and encourage everyone, in their local community and across the worldwide community of Pearson friends and supporters to support and sustain the opportunity this school offers to global students, irrespective of their financial background.

We are grateful to everyone who supports Pearson College UWC and we would love to hear your stories! Please consider completing this survey and get in touch with your ideas and, if you would like to know more about leaving a legacy gift to the College as part of your estate planning, please reach out to me, Caroline Banadar, Legacy Giving Officer at 250.858.4638 or cbanadar@pearsoncollege.ca. Thank you so much!