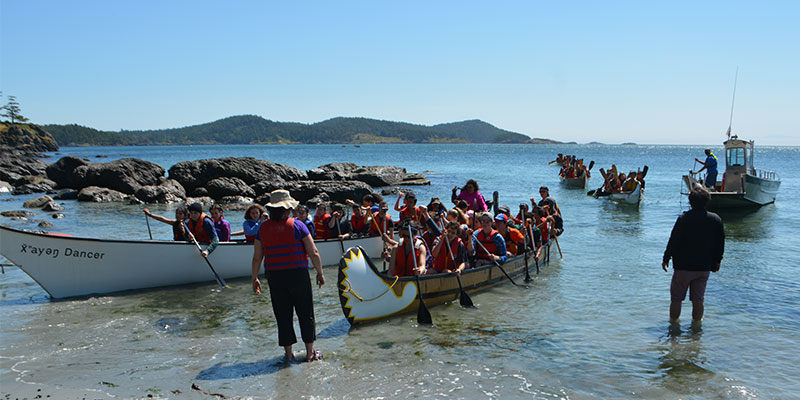 “Working with colleagues and school leadership, we designed a series of four, one-day forums to invite individuals associated with the College (which is on the unceded territory of the Scia’new First Nation)  and its community to speak from the heart and share their views, advice and recommendations to inform the development of the Indigenous Visions: Reconciliation Action Plan,” says Dawson.

The forums will be hosted in February and March 2020 to hear from across the Pearson community, including students, alumni, faculty, staff and other adults, as well as from Indigenous community and organization leaders, adds Dawson who notes that the process has immediate and future impact.

“A key measure of the effectiveness of a Reconciliation Action Plan is how it helps to ensure the success of Indigenous students on campus now and those who will attend Pearson – and other UWC schools – in the future.”

Dawson, who has been working with the College since last summer, says invitations are being sent to potential participants for the four forums scheduled for:

“We’re hoping these opportunities draw lots of interest and encourage robust, heartfelt discussions,” she adds. Any questions about the forums can be directed to Dawson at marcia@marcia-dawson.com.

A survey of past students of Pearson who identify as Indigenous complements the planned forum discussions, notes Dawson.

“The perspectives of Indigenous alumni gathered through an online, anonymous survey will be critical in fully understanding the experience of Indigenous students in past years and will inform Pearson how it can shape opportunities and support for Indigenous learners in the years ahead.”

Dawson says the survey is being sent directly to alumni who identified as Indigenous and for the whom the College has current contact information.

“However, we also want to invite anyone who attended the College who identifies as Indigenous but may be missed in our original invitation to take part in the survey have a chance to do so. Our list may not be comprehensive, so I invite anyone we have missed to contact me directly at marcia@marcia-dawson.com as soon as possible.”

Information collected will be anonymized and not attributed to identified individuals. The survey was created by Dawson’s colleague and collaborator Susanne Thiessen who has experience with similar outreach initiatives in the past.

These steps reflect outcomes from the work carried out by the Indigenous Advisory Council which drew critical input and reflection from across all sectors of the College community. A key outcome from the committee’s work was the creation last December of a draft framework for a Reconciliation Action Plan which is guiding current actions and will inform the College’s overall Strategic Plan.

An experienced Indigenous consultant who has worked with a number of educational institutions, other organizations and government ministries to assist them in building stronger organizations by establishing equity for Indigenous peoples and bridging Indigenous and non-Indigenous relationship, Dawson emphasizes that reconciliation cannot be a “quick fix” and is not-step-by-step.

“Reconciliation is ongoing, not a destination,” she notes. “Like all organizations, Pearson will continue to grow, change and develop so the Reconciliation Action Plan must be a living document. Over time, it must be monitored, evaluated, used and re-examined.”

As Dawson noted earlier, “As we journey on the path of reconciliation, we are building on strengths and addressing assumptions and gaps in knowledge and understanding. We recognize many people in the campus community throughout Pearson’s history have quietly built friendships and working relationships with First Nations and other Indigenous community elders, leaders and members in Canada and around the world.