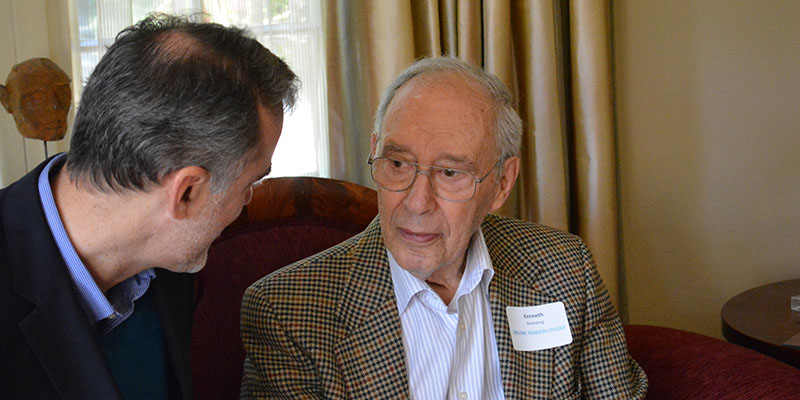 Earlier this month, word came of the passing on 21 May of Kenneth Rotenberg, a Patron and member of the founding Board of Pearson College UWC.

Ken was known as one of the original supporters of a United Word College in Canada. As a young man he met Kurt Hahn, founder of the first UWC in Wales. It’s told that, in Ken’s view, this meeting changed his life.

A contemporary of our inspiration, former Prime Minister and Nobel Peace Prize Laureate, Lester B. Pearson, Ken was on the Selection Committee for UWC Atlantic College in the 1960s. He subsequently joined Mr. Pearson and others such as Lord Mountbatten, John Nichol, Hartland Molson and former Governor General of Canada Roland Michener who formed the original committee to found a UWC in Canada.

As chair of the original UWC Canadian National Committee, it’s said that he jumped at the opportunity to develop a Canadian UWC school. Alongside other like-minded individuals, Ken helped to lay the cornerstone for what was to become Pearson College UWC which would welcome its first students in September 1974.

Over many decades, Ken continued to support the College with ongoing gifts and support. In particular, his generous support for what is now Calgary House is remembered.

Ken was quoted as saying that he admired the “high intellectual level of the students and their sense of service to the community.” His conviction in the power of the Pearson College and UWC mission, and in the promise of each generation of Pearson students, inspired his most recent pledge in support of Pearson’s current $40 million Renew and Re-found Campaign to secure the College’s next generation of scholarship and service.

Ken was a Toronto-based real estate developer who successfully developed commercial and residential real estate in Canada and the United States. He also served in the Royal Canadian Air Force in England during World War II.

In her letter of condolence to Ken’s family, Pearson Board Chair Anne McLellan wrote, “The United World College mission of peace, understanding and sustainability through educating young people from around the world will be a legacy of your father’s life for thousands of Pearson College UWC students and alumni. On behalf of everyone in the College’s campus and worldwide communities, we are grateful to join you in celebrating your father’s life of service, generosity and vision.”