In Memoriam — The Hon. John Lang Nichol, C.C., B.Comm., LL.D., Companion of the Order of Canada 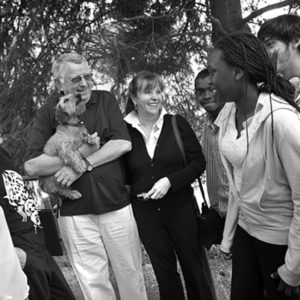 Just prior to our Pearson eNews deadline, word came of the passing of The Hon. John Lang Nichol, C.C., B.Comm., LL.D., Companion of the Order of Canada on February 24, 2020 in Vancouver. Mr. Nichol, a former member of the Senate of Canada and close friend and colleague of our College’s inspiration, Nobel Peace Prize Laureate (1957) and former Prime Minister Lester B. Pearson, was 96.

Throughout his long life, he made many important contributions to the establishment and continued success of Lester B. Pearson United World College of the Pacific. Mr. Nichol was the Founding Chair of the College and, in that capacity, worked tirelessly to raise funds and awareness to help establish a global education institution on the West Coast of Canada that would serve as a permanent tribute to Mr. Pearson and his commitment to international understanding.

Mr. Nichol served as Chair of the College’s Board of Directors from 1974 to 1985, was appointed a Patron of the College and accepted the role of Honourary Chair of the Board after retiring. Over the years, he maintained contact with many in College leadership and administration and made several visits to the campus.

Mr. Nichol shared his advice and experience freely and never hesitated to offer supportive and, when needed, critical comments – always aligned with the original vision that resulted in the creation of Canada’s only United World College.

Mr. Nichol is survived by his spouse Rosann Cashin who herself was a member of the Board of Directors of Pearson College UWC from 1990 to 1996 and again in 2002 to 2005. His daughter Sarah has also been a dedicated and generous supporter of the College, serving on the College Board from 1997 to 2003, and then joining the College’s Canadian Foundation Board until 2013. A father to three, Marjorie Nichol, Barbara Nichol and Sarah Milroy, and a grandfather and great-grandfather, Mr. Nichol’s extended family continue to make meaningful contributions to the well-being of Canadian society.

Together with his first wife, Elizabeth Nichol, who passed away in 2000, the couple made important contributions in building support for and awareness of the College.

Mr. Nichol was a proud Canadian, serving as a Lieutenant in the Royal Canadian Navy in the North Atlantic during World War II, and in the Canadian Senate from 1966 to 1973, under the appointment of Lester B Pearson. He was a passionate Liberal all his life, active in the federal campaigns of 1962, ’63, ’65 and ’68, and was President of the Liberal Party of Canada from 1964 to 1968.

He was the driving force in founding the Movement Disorder Institute at the University of British Columbia to carry out research and provide high-quality care for patients with neurological disorders. In 1980, Mr. Nichol was made an Officer of the Order of Canada and was promoted to Companion in 1996.

On behalf of the entire worldwide community of Lester B. Pearson United World College of the Pacific, we offer our condolences to Mr. Nicol’s family and our gratitude for the important role he played in establishing the College.

More information for anyone wishing to pay their respects to Mr. Nichol’s family can be found at this link.