The Huddart legacy lives on 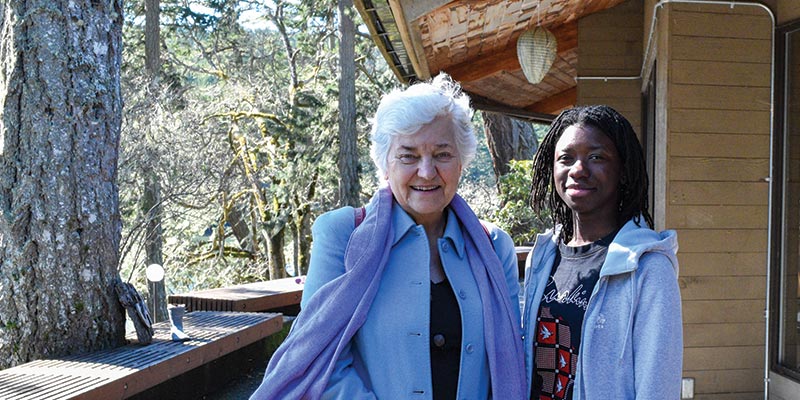 Before the COVID-19 pandemic closed our campus, Carol enjoyed lunch with this year’s Huddart Scholar, Dalila from Burkina Faso.

by Carly Milloy, Director of Advancement

Last April, I had lunch with one of Pearson’s longest supporters, Carol Huddart. For the College’s first three years, Carol was the spouse of house fellow (what is nowadays called ‘house parent’) Larry Huddart, her late husband and Pearson English and Economics teacher. Since moving off campus in 1977, Carol has maintained lasting friendships with Pearson alumni and their families around the world, checking in on them regularly during her travels or by mail and phone.

At lunch that day, Carol shared with me that she had sold her family farm in Peterborough, Ontario. With the proceeds, she intended to donate up to $300,000 to grow the Pearson endowment that students had set up in her husband’s name when he passed, nearly 35 years earlier. Larry would have been 90 years old last year and is still remembered as a wonderful teacher.

“Larry clearly gave his time and energy because he wanted to, not because he needed to. An inspiration to us all,” shared one of his former students.

Carol’s gift is a tribute to Larry, and she also wanted to use it as a challenge to inspire students from the College’s earliest days to join her in giving back. With that, she agreed to match all new gifts to the fund up to $300,000. In early January, I was pleased to report to Carol that alumni from these earlier years were indeed inspired – they had met her match goal!

One alum was so motivated by the generosity of the campaign that he even offered to extend the match for all new gifts up to $100,000 made to the Larry Huddart Endowment Fund with a pledge in his estate plans. That match goes until the end of 2020 and I look forward to reporting back to Carol and the anonymous donor about its success.

Each year, these endowed funds sponsor a partial scholarship to Pearson for a French-speaking student from West Africa (a region where Carol and Larry had travelled to in the 80s and seen the great need and potential of youth). Now, thanks to the leadership and generosity of Carol and our alumni, the Larry Huddart Scholarship has tripled in size.

Thank you, Carol and to all the alumni who contributed to the Fund.