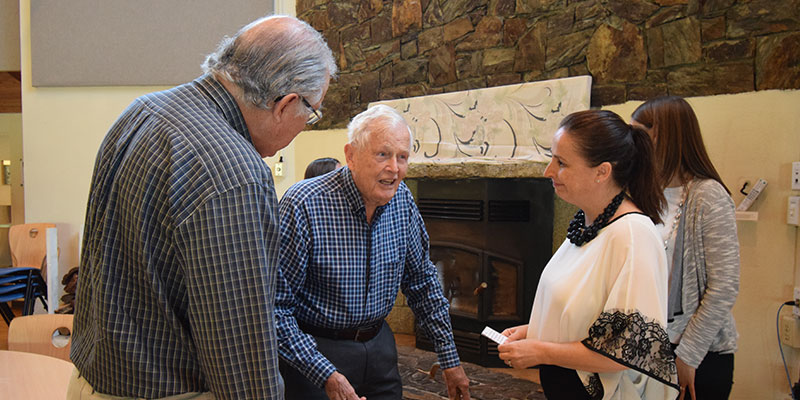 Retired Royal Canadian Navy Captain Christopher Pratt is much more than a close friend and Patron of Pearson College UWC, but you would never hear this from the modest nonagenarian.

Chris is a passionate and articulate supporter of the United World College Movement and a second-generation Host Family volunteer. He literally has hosted and gotten to know generations of Pearson students who, in turn, take away warm memories of this generous man to their home nations around the world.

“I first met Chris when he invited some of us Pearson students over for brunch one weekend,” said alumnus Aziz Sonawalla (YR 41/2016, India). “What I first thought would be just a nice meal with a host family and some time away from campus became one of the most cherished memories of my two years at the College.

“About a dozen of us showed up at his door, and even though we had never met before, he welcomed us in like family. With his warm smile and the awe-inspiring stories of his adventures around the world, he instantly connected with every single one of us. Chris’ generosity and kindness have made an impact on Pearson students across generations, and I am lucky to have him as a friend.”

Recently, the College honoured Chris with a short ceremony of recognition that spoke volumes about the man. Held in the dining hall at lunch time and designed to be “as least disruptive as possible,” Chris chose to be recognized through a series of small plaques that will remind future students not about the man but about the ideals that underscore the key foundations of both the UWC Movement and the school inspired by leader and peacemaker Lester B. Pearson.

“Among individuals, as among nations, respect for the rights of others is peace,” is one of Juárez’s best-known pronouncements. Juarez, of Indigenous heritage, was Mexico’s most revered president (1858 – 72) and a noted democratic reformer.

Chris asked that this statement be memorialized in several languages, including French, Zapotec (a group of languages and dialects of the Zapotec Indigenous peoples of southern Mexico) and in the language of the Scia’new First Nation, upon whose unceded territory the College is located. (As of this writing, the Scia’new translation was still in progress. The appropriate plaque will be posted after that is completed.)

“During the ceremony, Chris reminded students that, “You’re going to remember Pearson because it’s well-known that your teenage years are the most formative of your life. This is where you’re questioning what you’ve always been taught by your parents, your teachers, your religious leaders and you’re deciding what you’re going to accept for yourself. What you are now is what you are deciding to be for the rest of your lives – that’s why Pearson is so important to you.”

“Chris’ generosity of spirit, commitment to the UWC mission, and genuine engagement with so many students is a remarkable gift to the College, and a lived example of Benito Juárez’s vision of peace,” said President and Head of College Désirée McGraw at the unveiling of the plaques.

“Chris has welcomed students since the late 1980s and, more recently, established what has become a beloved tradition of inviting students from each House to camp on his property during their orientation week, encouraging them to reflect on their personal goals while experiencing the beauty of west coast nature.”

Within the Pearson sphere, Chris’ generosity of spirit and respect for the students and ideals of the UWC Movement is well-known, but he is also a pillar of the local community as, among other roles, the Chair of the Metchosin Foundation.