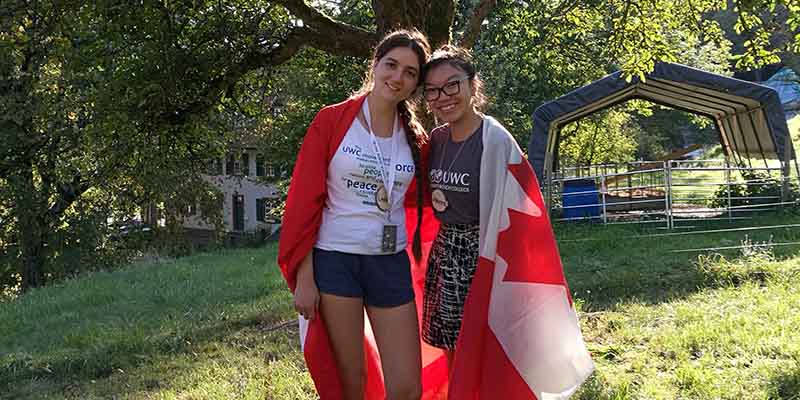 Editor’s Note: This month’s story focuses on the young Canadians who will be attending Pearson College UWC this fall as part of the Year 47 cohort. Watch for the story of Canadians who are scheduled to be first-years at the 17 other UWC schools around the world in the August edition of Pearson eNews.

From the child of a single mother who wrestled with the dilemma of quitting school to work full-time to support the family versus taking an opportunity to go to a UWC school (with the strong encouragement of their mother), to the piano and Dungeon and Dragons-playing prize-winning speaker and eco-activist who worked for eight summers at the Awajishima Monkey Centre, to the multilingual accessibility advocate who successfully managed the family hotel, at age 10, during a family emergency, the backstories of Canadians scheduled to arrive at Pearson College UWC this fall is inspiring.

Despite all of the uncertainties and tensions of the past six months as the coronavirus made its way around the world, Nina Moroso, UWC National Committee of Canada (UWC-NCC) Executive Administrator, together with NCC volunteer Chair Jennifer Dueck and teams of national, provincial and territorial regional national committee volunteers, kept up the demanding pace of selecting, evaluating and eventually welcoming most* of the 49 young Canadians this year to the UWC movement.

“When we select students to represent Canada at UWC’s around the world, we look for students who are passionate about the UWC mission, who are driven to make positive change in the world, and who can thrive on a UWC campus for what we know is a challenging two-year program,” said Moroso. “It can be tough to identify students with the grit and courage required for this kind of experience.

“During this cycle of selections and nominations, as the world has turned its collective attention to crucial issues like climate change and racism, and as we have endured the challenges and uncertainty associated with a global pandemic, we have every confidence that the Canadians in the UWC Class of 2022 are some of the most resilient, brave and persistent students we could ever hope for.”

Altogether, 29 Canadian** students are scheduled to attend Pearson beginning this August with the rest planning to attend one of the other 17 UWC schools around the world. The young scholars coming to Pearson are from most provinces and territories, along with a handful of non-resident Canadians from lands as diverse as Norway, Texas and Romania, and they represent a diversity of backgrounds, experiences and motivations.

The motivations for applying to UWC are as varied as the individuals. One student was inspired by her mother who, as a volunteer with the International Red Cross worked in Kenya to support fleeing Rwandans from that country’s genocide in 1994. Another learned about UWC through a article about Canada’s Head of State, Governor General Julie Payette who also happens to be an alumna of UWC Atlantic.

“I think going to a UWC will allow me to excel and improve…to focus on my interests in ecology and humanitarian aid,” noted one student who added in his application that an experience with a close relative who battled drug addiction taught him perseverance. Another student who was described by references as “humble; a leader who takes on additional responsibilities,” wrote that enrolling in his father’s old school one summer in Uganda – joining classrooms with up to 130 students at a time – inspired the work ethic that he will be bringing to Pearson.

The UWC movement’s continuing commitment to selection based on merit with a focus on diversity and bringing together young people from a range of life experiences, personal perspectives and socioeconomic backgrounds is reflected in the Canadians coming to Pearson.

For example, two years ago, a family home in Afghanistan was destroyed. Despite significant challenges, a young member of that family made their way to Canada where, as a person with refugee status, they built a life that includes projects such as working to establish a non-profit to support Afghani youth, running short courses to reach out to that community and founding a book club to support English-language learning.

That student, together with their peers, will be welcomed to the Pearson campus in August.

The application process to UWC is a comprehensive one, so it is no surprise that successful applicants not only bring a passionate and a broad world view, but also frequently have a record of achievements in their younger years beyond science fair wins, athletic accomplishments and public speaking awards (though they are all good too!).

One student wrote about how they were so affected by visiting the impoverished orphanage where their mother was raised that they set about, at age 10, raising funds for that facility in Southeast Asia. A proud mother, who promised to match all funds, was only momentarily surprised when she discovered she would have to match the $2,000 raised.

Another incoming Year 47 student decided to become a volunteer and work with young newcomers at their Maritime city’s community language school, a nod both to a desire to assist newcomers and to preserve their family’s heritage language.

“The fact that students have chosen UWC at this critical time for our planet and have stuck with their plan to attend UWC over the last four or five months speaks volumes about these tenacious, talented young people,” said Moroso. “We are already so proud of them and we are so grateful to them and their families for having faith that UWC is not just a good choice but the best choice in this moment!”