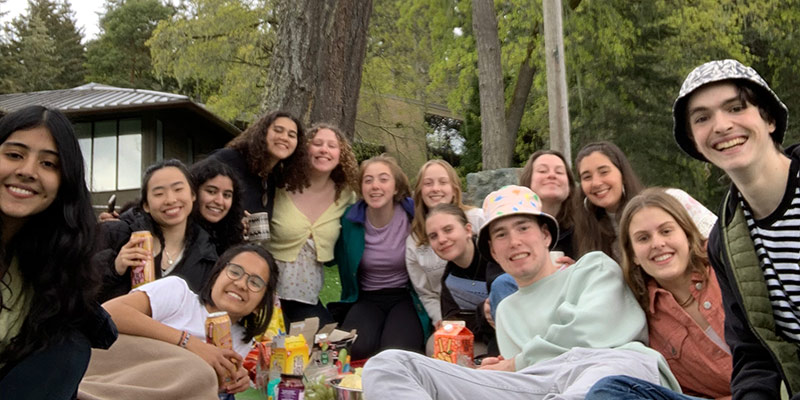 Last month, Pearson’s student-powered and inspired Gender, Equity, and Empowerment Club hosted “GEE Day,” an annual day dedicated towards celebrating and uplifting the voices of non-men. The team worked diligently for months to develop and refine a day full of educational activities and personal stories to shine a light on the non-man experience.

What began in 2019 by a group of five students and their inaugural event; “Girls Talk,” we have now grown to a group of over 20 people who were able to organize a full day of workshops, empowering activities and an evening show titled “OMGEE.” GEE members collaborated with the community to engage and educate people throughout the day.

Throughout this school year, the GEE team met weekly to learn about topics such as Missing and Murdered Indigenous Women, Girls and Two-Spirit People, period poverty, discussion facilitation, and more. The team also prompted important community discussions on topics like sports inclusivity, feminism 101, and abortion rights.

Most recently, GEE and the MESACANA (Middle East, South Asia, Central Asia, and North Africa regions) family joined forces to present “Rage. Resistance. Power: Feminist Movements in the MESACANA Region” for a recent Regional Day on campus. As well, the GEE team was integral in organizing student awareness and celebrations for International Women’s Day, International Day for Women and Girls in STEM, and the United Nations 16 Days of Activism against Gender-Based Violence. GEE Day was the culmination of the 2021-2022 school year in all things gender.

The day began with vulva cookie decorating, as Faculty member Annice deChamplain delivered an “ask me anything” session on all things related to menstruation and sexual health. Throughout the afternoon students dove into intersectional feminism, learned about the sexualisation and fetishisation of lesbian relationships, discussed essential gym etiquette, and reflected on the exploitation of the Global South through looking at the circumstances of female garment factory workers. In the afternoon, we also saw a Pride Parade organized by the Queer family, who’s route followed the paths around campus. Dinner was hosted in the cafeteria, in which students were encouraged to disobey any dress code they have ever been subjected to.

Following the legacy of “Her” and “Girl’s Talk,” the night was completed with a show titled “OMGEE,” where acts such as videos, dances, songs, spoken words, and art performances were shared with the Pearson community. A most memorable act was a video directed by Arvin Dang and Marija Uzunova Dang in which members of the Pearson community collaborated in a reading of a famous poem titled “Existing in Big Ways” by Suhaiyma Manzoor-Khan.

The audience also got to learn about being a woman in Nicaragua, hear personal stories of sexual assault, and the impacts of the patriarchy on gender identity. Lastly, this year the sexual assault survivor fashion show made a comeback, once again bringing light to the role clothing plays in blaming survivors of sexual assault and justifying aggressors. Overall, the show was an output for students to share different experiences of gender within our community and was very impactful.

To celebrate a successful GEE day, the team gathered on the director’s lawn and enjoyed a lovely picnic accompanied by the view of Pedder Bay and the surrounding mountains. Along with the UWC values, we believe that people influenced by GEE Day, and this group, will continue to carry their learnings when they spread out into the world post-Pearson. Who knew a collection of acts in 2019 would lead to a student movement, forever changing our campus? This year has been an integral part in Pearson’s steps towards Gender Equity, and Empowerment, and it is just the beginning.

“GEE Day was a day that made me realize the repression women are under without them even acknowledging it sometimes. It is crazy to see the impact that society had on us even if we are from all around the world. During the screaming circle, all this resistance opened my eyes on how amazing and proud I was of us for overcoming this rage and transforming it into our force!! We are stronger and we will change so much for ourselves. Thanks to GEE Day, I felt so empowered, understood and connected to the lovely humans that I am surrounded by. I am so excited to see what we will achieve next! Eternally grateful for this family we have.”

“I am so happy that I had the chance to work with such an amazing team! Every event we organized was powerful and meaningful to me; I will never forget crying during some performances. I am looking forward with excitement to what next year brings.”

“On GEE Day I attended workshops on the four waves of feminism, the fetishization of lesbian relationships and women loving women relationships, and hatred and violence against Asian women. Every workshop encouraged students to think critically of the world we live in and understand the prevalence of these issues which are embedded in the media we consume, the education we receive, and the values we are instilled with. Through conversation, personal experiences could be addressed ultimately allowing students to gradually work towards recognizing and deconstructing their internalized sexism.”