Comings and Goings on Campus 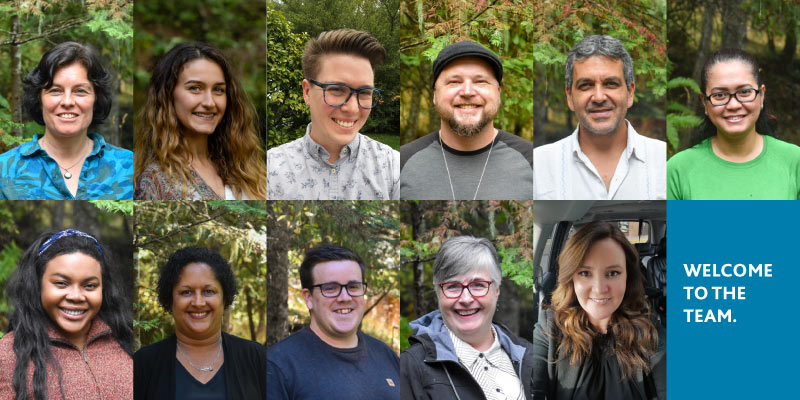 For the new academic year, we warmly welcome to the Pearson community a number of new arrivals on campus, all of whom have settled in to their roles and are contributing to an increasingly  stimulating academic and meaningful community life. With these talented additions, we are assured of an ever-more dynamic Pearson team.

Alumna Virginie Magnat (YR 9/1989, France) is our new IB Theatre Literature Teacher, taking over this role from now-retired Libby Mason. Virginie and her partner Robert Ornellas live on campus. Virginie was most recently Associate Professor, Department of English and Cultural Studies, Languages and World Literatures with UBC Okanagan in Kelowna. A French citizen, Virginie has a personal commitment to cultural diversity, cross-cultural performance research and pedagogy as a powerful site of encounter, exchange, and collaboration, values initially established during her two years as a Pearson student.

Marija Dang has joined Pearson in the new position of Experiential Education coordinator. She is Macedonian and has lived in many countries, acquiring a BA, Anthropology at the American University in Bulgaria and an MA, Science Technology and Society at Maastricht University, along with a year at Bard College, Berlin. Since 2013, she has lived in India – leading and directing outdoor expeditions and involved in house parenting, teaching and the creation of the project-based diploma at Mahindra UWC. She joined us on campus at the beginning of the academic year.

Jordan Bolay has joined us to teach IB English A Language and Literature. Prior to moving to Victoria, Jordan recently defended a federally-funded PhD in Canadian literature at the University of Calgary under the award-winning novelist and cultural critic Aritha van Herk.

We would also like to welcome Mark McAllister, our new IB Visual Arts Teacher. Mark, a professional artist and teacher, is passionate about acrylics and Japanese woodworking. He is also a 4th Dan Instructor in martial arts, nature lover and enjoys spending time with his family.

A warm welcome ‘home’ after a year’s sabbatical to Economics Teacher Samuel Perez de Leon and Berenice Sanders, who – along with their children – are also the Calgary House Parents family.

Jean Penola is teaching English B while Kim Meredith is away on maternity leave. Jean has a Masters in English Language and Literature and is presently completing her Masters of Arts in Intercultural and International Communication. When not attending classes or teaching here at Pearson, Jean is a Program Coordinator with the Victoria Filipino Canadian Association and Dance/Theatre Instructor with ArtsREACH Canada.

Clint Kuzio, the Pearson College Indigenous Educator, Advisor and Coordinator of Reconciliation, and the first Indigenous Educator and Advisor at any UWC, left Pearson in June. He worked to establish a program of support for our Indigenous students and began the process at Pearson of understanding Indigenous history and what reconciliation means. Clint remains part of the Pearson community, both as an alumnus and neighbour, and we thank him for the important work he has done for the College and our students. We wish him well in his next endeavours.

Eva Campbell, our IB Art Teacher, decided not to renew her contract this year. Eva was with Pearson College UWC since 2011 and will be missed by all. We thank Eva, for all her hard work and commitment to the College and students. We wish Eva all the best and every success in her new endeavours.

We will miss Jamaal Cox in his roles as Library & Learning Support and Fitness Coordinator, and wish him much happiness and success in his new position as Education Advisor at Royal Roads University.  Happily, he remains a campus Resident with his spouse Julia Clark and their family.

Kindy Carter is the new Executive and Database Coordinator for Advancement and External Relations. Prior to joining Pearson, Kindy was a Program Associate at Royal Roads University.

Angela Gatari is our new Community Events and Partnerships Manager. Angela brings experience both as the former Victoria Conference Centre Event Manager and as Director of Communications and Event Management at Reboot Communications. She also worked in Japan for more than a decade in public and international relations and is past Vice-President of the Victoria Immigrant & Refugee Centre Society. Angela has a BA in Mass Communications from Carleton University and an MA in Applied Communications from Royal Roads University. Angela, her husband Hinga and their children moved onto campus in October 2019.

In another new position, Reese Harrison has joined Pearson as a part-time College Medical Assistant, working with Susan Duffell-Warthe RN at the health centre, and living on campus. Originally from Alberta, Reese moved to Victoria in 2016 to complete a Bachelor of Science in Microbiology and has worked in emergency medical services in Alberta, British Columbia and with a major cruise ship line. Currently, he also works part-time as a paramedic for B.C. Ambulance on Salt Spring Island.

Deborah Walker, recently joined Advancement as a part-time Planned Giving Officer. She previously worked at Pearson before going on to Glenlyon Norfolk School and the University of Victoria.

Candice Hall, our new Human Resources Associate and Volunteer Coordinator, started with us on Monday, 21 October. Prior to joining us, Candice was the People Experience Coordinator for Nurse Next Door, where she was responsible for recruitment, onboarding, overseeing all administrative policies and best practices along with employee relations.

With these talented additions, we are assured of an ever-more dynamic Pearson team. Welcome all!