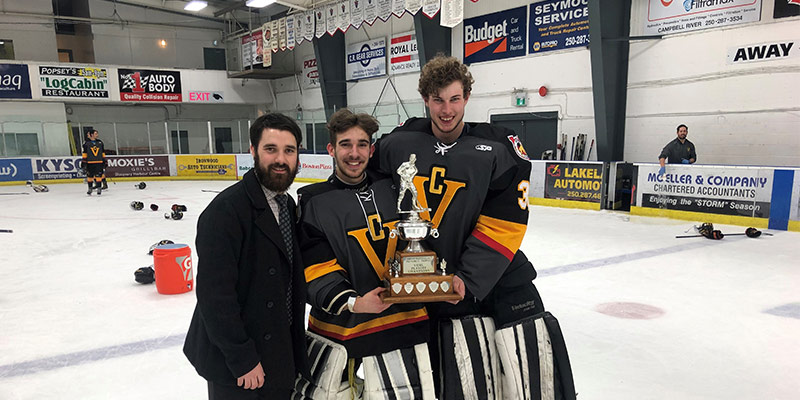 In B.C. Provincial Junior B Hockey Championship tourney play, the upstart Revelstoke Grizzlies swept past the powerful Island champs Victoria Cougars to notch an upset 5-1 victory and head home to the Interior as the winners of the Cyclone Taylor Cup marking them as provincial champions of the 2018-19 season!

Cougars Assistant Coach Jake Nixon said he was stoked by his charges’ determined play and said that taking the VIJHL championship and coming out as the second-best team in the 42-club B.C. junior B circuit was certainly still something to be proud of – the boys can hold their heads high!

Well, if you didn’t quite understand why we’re, at least temporarily, adopting the breathlessness of sports reporting, it’s because Jake Nixon is one of our own and we’re proud of his achievements.

Jake, who’s been with Pearson College UWC for about five years, started as a summer maintenance technician who found his niche and stayed on. It’s a good thing, because he’s one of the nicest guys on campus.

“For me, I’ve really enjoyed meeting people from around the world,” says Jake. “You just think about it as work but all the time you get the chance to sit down and talk with someone who’s from a country you’ve never been to or maybe never heard of and just get the story of their life – it’s very interesting.”

This is his second year as an assistant coach with the Victoria Cougars, part of the nine-team Vancouver Island Junior Hockey League, working with Head Coach Suneil Karod, General Manager Brody Coulter and assistant coach Jake Stolz. “The four of us are working really well together this year.”

Jake works with the defencemen on the squad – the players charged with defending their end of the ice, keeping the puck away from the goalie behind them and feeding the forwards to enhance and supplement their offensive scoring opportunities.

“I do a lot of video work with the team as well,” he adds. “We review past games to look for things we need to work on, we watch other games to find out what our opponents are doing and incorporate what we learn into our practices.”

Ice hockey is a passion of many Canadians, as much of the world knows, so it’s no surprise that every part of this country hosts teams and leagues at all levels of play. The 16-to-20-year-old players that Jake works with are largely from B.C., but some also are attracted to leagues in this province from across Canada and the United States because of the high caliber of play here.

The Cougars finished first in the South Division of the Vancouver Island circuit, eventually taking the league championship before moving on to the provincial tournament against teams from leagues in mainland British Columbia, as well as the host team from Campbell River, another Vancouver Island community.

With a 48-game regular season and 15 road trips this year by Jake’s reckoning, that’s “a lot of time on the bus!”

At nearly 28 years of age, Jake has been involved with the team and league in one capacity or another almost since his playing days ended nearly seven years ago. He finds coaching a role that particularly suits his approach to the game.

“I always enjoyed communicating when I was a player (in the VIJHL) – that got me interested in coaching as well – and, of course, I just didn’t want it to be over! Coaching at the highest level possible has always been my goal and right now that’s where I’m at so it’s been very exciting.”

Jake says he appreciates the opportunity that coaching gives you to think more strategically about the game and to pass on your knowledge to younger, developing players.

“It’s a little different as a coach. When you’re playing, you’re simply playing but when you’re a coach you’re thinking more about what the team needs to do.”

Coaching hockey and working full-time at Pearson keeps him busy but in his off-hours he likes to spend time with family – many of whom live in the area — and friends, take in summer music festivals on the Island and go camping with his girlfriend – who he met when she was working as a volunteer at Pearson three years ago.

But after nabbing the silver medal for the past three years in a row, Jake is looking forward to helping lead the Cougars to greater heights and to continue working with young people.

“It’s always good to help kids pursue their dreams. I always enjoy seeing kids move on, meeting them when they get older and, you know, sometimes they’ll say, ‘thanks for everything you did.’ That’s an enjoyable part of coaching.”