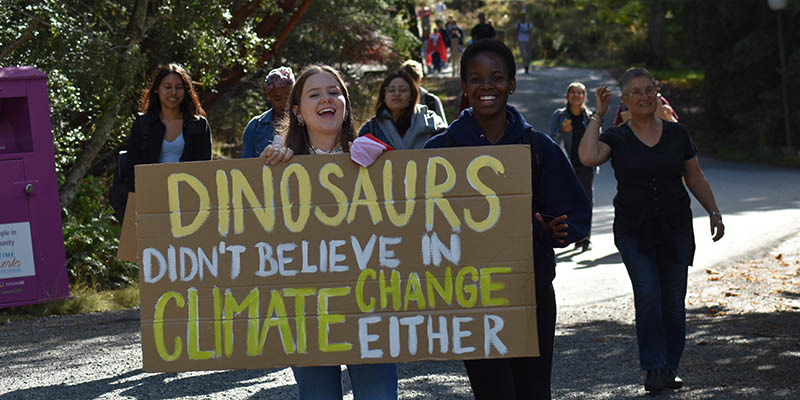 This year’s 21 September UWC Day theme — Climate of Change – aligned with the worldwide FridaysForFuture in cities around the world on 20 September. At Pearson College UWC, our students joined with people of all backgrounds and beliefs from across Vancouver Island at Victoria’s Global Climate Strike event at the Provincial legislature grounds.

During the event, Pearson students spoke to the crowd eloquently, passionately and urgently about the impact of climate change on young people and on the planet. To mark the convergence between the UWC Day theme and local climate action, student-led discussions, together with transportation to the event laid on by the College, meant that Pearson almost certainly had the largest representation of any school at the downtown event.

Pre- and post-Climate Strike education sessions were also scheduled on campus. Students, together with advisors, faculty members and other adults, worked to better understand the impact of climate change on all cultures and communities and discussed how to most effectively raise their voices in many ways and in many forums beyond a one-day action.

Pearson as a school has historically built upon a commitment to sustainability at global and local levels. Last spring, students had a chance to ask tough questions of then-federal Minister of Environment and Climate Change Catherine McKenna at a “bearpit” session on campus. Following that discussion, nearly 250 student and adult participants produced a total of nearly 1,000 hours’ worth of ideas and actions in response to the challenge of making Pearson “the greenest campus in Canada by 2024,” a date that coincides with our 50th anniversary.

The College’s 2010 Sustainability Charter aligns with Pearson’s Strategic Plan 2017-2022 and focuses on energy and energy/carbon footprint reduction as well as minimizing water usage and food waste. Over the past four years, most of our student residences and several other academic and other campus buildings have been rebuilt or upgraded to modern energy-efficient standards. Our commitment to sustainability provides a comprehensive set of guidelines and actions that are based on our mission statement and acknowledges climate change as a global threat which transcends boundaries.

Collectively, we also recognize and value that our campus is located on the unceded territory of the Scia’new (Beecher Bay) First Nation and that this year, we welcomed a number of Indigenous students from Canada and around the world. We appreciate and understand that we have much to learn from Indigenous people who are the original inhabitants of what is now Canada and who have long been the guardians of the land and sea that we treasure.

Like educators the world over, Pearson education leaders recognize that there are many ways in which students can express themselves about climate change individually and collectively in constructive, responsible and vital ways. The 20 September event and the Climate of Change UWC Day theme, was inspiring because virtually the entire student body joined the community to use the power of the collective voice to raise awareness of climate change and to call for action.

President and Head of College Désirée McGraw, a long-time climate activist, posed several thought-provoking questions to students and educators in conjunction with UWC Day. Among them, “What are our responsibilities as an education movement during times of the climate catastrophe? How well do we live up to our mission of making education a force for a sustainable future?”

Most would agree that the role of an educator is fundamentally to provide students with the environment, education, experiences and encouragement to understand and explore new intellectual, moral and physical worlds. Educators should, and do, foster and channel young peoples’ natural instincts for action and innovation in a way that both supports the experiential and academic educational processes and prepares them for a future of life-long learning and positive, constructive action.

Educators seize the opportunity to present students with documented and proven facts and to hone the critical thinking abilities of young minds so that they can better distinguish between fact-based and science-supported evidence and views that rely on insufficient or distorted research or simply on opinions.

With this in mind, the UWC movement is truly fostering a climate of change by building on the urgent and legitimate concerns of young people regarding their future and the future of planet Earth. At Pearson, we are proud to represent, and together with our students, campus and global alumni (4,300-strong!), to continue to play a strong role in supporting this imperative.