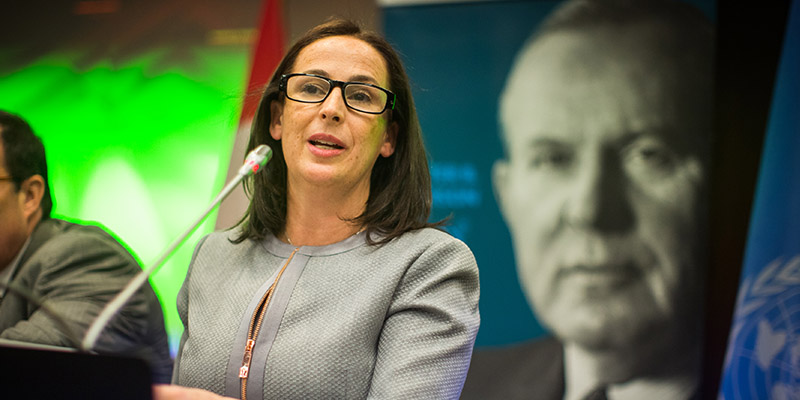 Hello and best regards of the season to you. Before the holidays get into full swing, I wanted to provide you with a detailed accounting of the many ways in which our College has helped celebrate our inspiration and namesake, former Prime Minister Lester B. Pearson.

As you may know, Monday, 11 December was the 60th anniversary of Lester B. Pearson receiving the Nobel Peace Prize in 1957, Mr. Pearson’s work in helping defuse the Suez Crisis through the creation of the first UN Emergency Force (the “Blue Berets”) was instrumental in calming an international emergency and in establishing Canada’s reputation for “punching above its weight” in global affairs.

Mr. Pearson’s strong belief in international understanding through dialogue and global education was an inspiration for the creation of Lester B. Pearson United World College of the Pacific, or Pearson College UWC. During the 2017-18 academic year, we at the College are spearheading national recognition of this important milestone in Canadian history through a series of awareness-raising events both on and off-campus – including events in Ottawa, Victoria and Toronto.

This special occasion is not only a celebration of a towering achievement by a characteristically humble Canadian icon, it is also an important opportunity to remind Canadians and key thought leaders across this country and around the world about the unique College that bears Mr. Pearson’s imprint and takes its inspiration from him. The achievements of the College’s alumni – 4,000 strong and counting – as well as our current students, are the most powerful and longest-lasting legacy of Mr. Pearson. 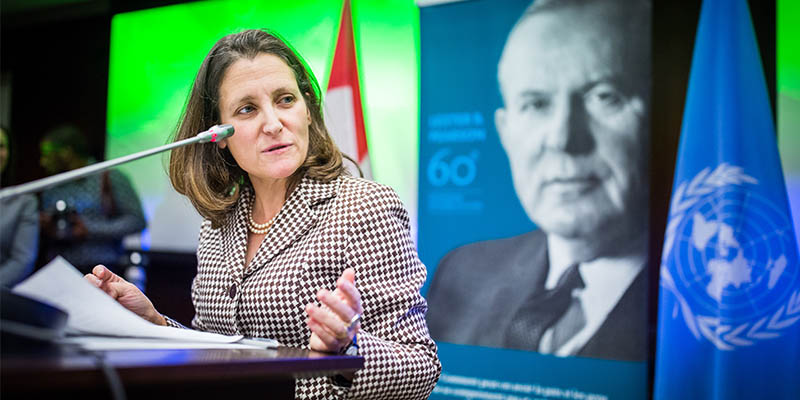 On the 11 December anniversary date, together with Global Affairs Canada, we cohosted a packed event in the Wellington Building adjacent to Parliament Hill in Ottawa. We were honoured that Minister of Foreign Affairs Chrystia Freeland – an alumna of UWC Adriatic and a good and knowledgeable friend of the College and the UWC movement – spoke at this event to recognize her predecessor. You can read her statement here.

I wish to express our gratitude to Minister Freeland and Global Affairs Canada for so graciously cohosting the memorable 11 December evening. This was the third of three major 60th anniversary events in which Pearson College UWC has collaborated with key partners.

We were delighted and humbled that four members of the Pearson family, each accomplished in their own right, also attended this event alongside Cabinet ministers, parliamentarians, diplomats, several dozen UWC alumni and other dignitaries. Senator Landon Pearson, daughter-in-law of Lester and a long-time children’s rights advocate, attended with three of her living children:  Anne, Hilary and Michael. Anne, of course is a current member of our Board of Directors and her siblings have previously served on the College Board.

Michael shared a warm and personal account of his grandfather’s life, along with an amusing retelling of Mr. Pearson’s characteristically humble initial reaction when told he would receive the Nobel: “Gosh! I am thunderstruck!” You can read a shortened version of his engaging talk on our special 60th anniversary webpage.

Special guests at this event included representatives of the Royal Embassy of Norway who shared this event on their Facebook page. Oslo, Norway hosts the annual Peace Prize award ceremony and lecture.

My own remarks at this event echoed those of our special guests. In these, I said, “Lester B. Pearson believed that our school could help to shape and inspire young change-makers from across Canada and around the world to go on to make a difference in their respective careers, communities and countries.”

Meeting with the Governor General 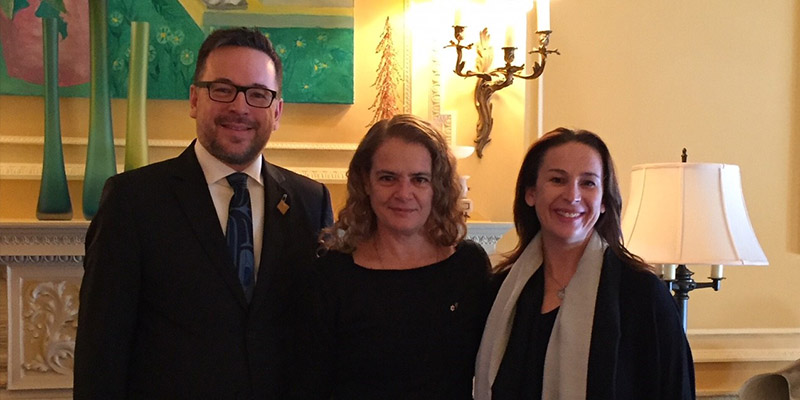 Earlier on 11 December, Vice President, Advancement and External Relations Dan Hurley and I were honoured to be received by Governor General Julie Payette, an alumna of UWC Atlantic, at her Rideau Hall residence. There, in addition to discussing the legacy of Mr. Pearson’s Nobel Peace Prize, we also had the opportunity to converse on youth engagement in Canada, the College and the UWC movement. We were pleased to extend an invitation to Her Excellency, another past member of the College Board, to visit campus during her term as Governor General. We also extended an invitation to our 2018 annual general meeting (AGM), which we hope to hold next November in Ottawa.

Dan and I also had additional meetings in Ottawa with key federal government representatives, donors, supporters and friends from the region. As well, many thanks to Board member Lori Sterling (YR 2/1977, Canada-ON) who hosted a splendid alumni gathering at her home. I was thrilled that so many area alumni were able to join us.

On the anniversary day, English and French-language versions of a Pearson College UWC news release were distributed regionally and nationally. In these, Board Chair Anne McLellan said, “Mr. Pearson and his colleagues’ commitment to global education helped bring about the founding of a school that has instilled his values in more than 4,000 students from around the world since opening in 1974.”

Cake on Campus – and What Does Peace Mean to You? 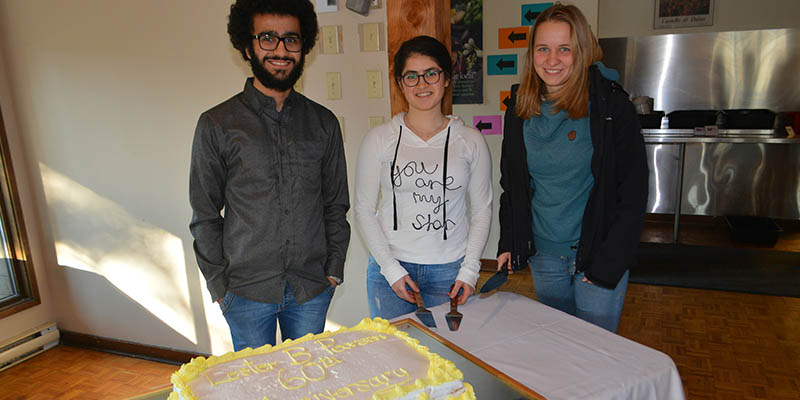 The big day on campus was marked with a Peace Poster in the cafeteria on which students were encouraged to write their reflections on peace, international understanding and the impact of Mr. Pearson’s work on young people today. And, students being students, there was of course cake to celebrate the anniversary! That evening, students helped organize a discussion group about what peace meant for them in their lives and how they intended to positively impact their communities through peace-building.

In the Media and on Parliament Hill

As part of the leadup to the anniversary, we arranged to place an op-ed article with the largest-circulation newspaper in British Columbia, the Vancouver Sun. We worked with Pearson alumnus and Canadian Senator Yuen Pau Woo (YR 6 / 1982 Singapore) who kindly consented to write a personal reflection on the 60th anniversary of Mr. Pearson’s recognition by the Nobel committee. In his article, he graciously acknowledged Pearson College UWC, its students and alumni as the true living legacies of Mr. Pearson’s commitment to global dialogue and understanding.

Senator Woo, the leader of the Independent Senators Group, also spoke for the record in the Senate of Canada on 12 December. English and French versions of Parliamentary statements can be viewed on our special 60th anniversary webpage. A statement was also shared with us by Member of Parliament for Esquimalt – Saanich – Sooke Randall Garrison this week. Mr. Garrison was prepared and pleased to deliver this statement in the House of Commons however, due to unforeseen circumstances beyond his control, this had to be postponed.

A further outreach initiative – designed to raise awareness of the College in Victoria and Vancouver Island as a whole – was published 9 December in the print edition of the Victoria Times Colonist daily newspaper. This advertorial tied in to the 60th anniversary and helped reacquaint our local and regional friends and neighbours with “the world at your doorstep.”

Still in the media world, our staff worked with James Baxter’s iPolitics website and magazine on a special year-end edition that was a tribute to Mr. Pearson and his achievements. Please check the downloadable link for a College awareness display ad and a brief, visual two-page spread about the College. I would also be remiss if I did not mention a good friend of the College, columnist and academic Andrew Cohen. Andrew, the author of an excellent biography of Mr. Pearson, regaled College students in early December with a detailed and timely examination of the Nobel laureate’s life and career. 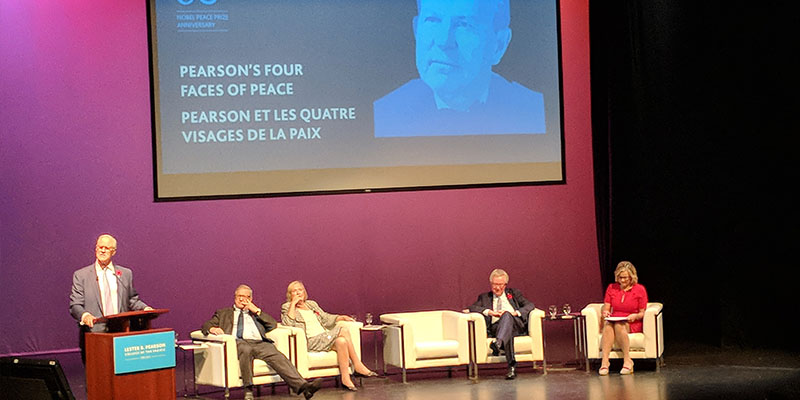 On 2 November, our “The Four Faces of Peace” event, in partnership with Massey College, drew hundreds of people to the University of Toronto’s Isabel Bader Theatre to a historic gathering of five Canadian foreign ministers – Minister Freeland and her predecessors Joe Clark, Lloyd Axworthy, Bill Graham and Barbara MacDougall. During this event, we took the opportunity to show a short, inspirational video about the College and the UWC Movement. The distinguished guests in attendance also took well-reasoned questions from two of our students, Daniel (YR 44/2019, Venezuela) and Adrita (YR 43/2018, Bangladesh), via video. I would like to extend my sincere personal gratitude to Massey’s Head of College Hugh Segal and Senior Fellow Dr. Thomas Axworthy, both of whom graciously worked with Pearson in hosting this high-profile and important event.

Two weeks later, on 17 November we co-hosted the opening reception of the Victoria Forum, a three-day conference focused on diversity and inclusion organized by the University of Victoria and Global Affairs Canada that drew participants from across Canada. Hosting this event provided the College with the opportunity to build awareness of our school, alumni and students with key local and regional leaders such as provincial Minister of Citizens Services Jinny Sims and Victoria Mayor Lisa Helps, as well as with key national influencers such as Assembly of First Nations National Chief Perry Bellegarde and Minister of Justice and Attorney General of Canada Jody Wilson-Raybould. 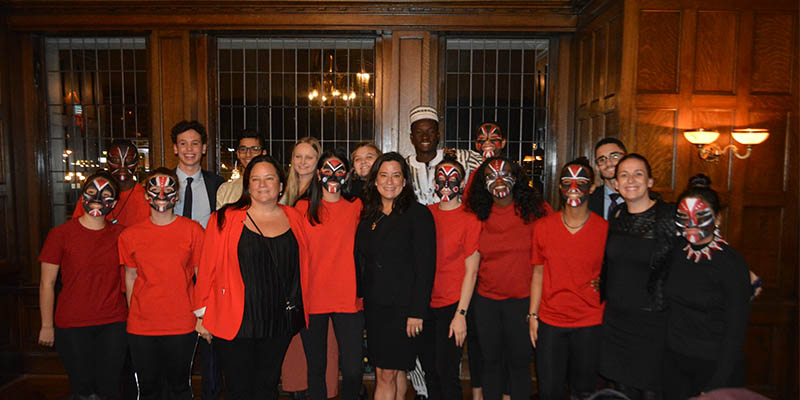 A strong and visible presence by Pearson College UWC students, faculty, alumni and other personnel was key to an impactful evening. Alumnus and Senator Yuen Pau Woo delivered a powerful speech about the impact of Mr. Pearson and his legacy upon modern Canada as well as on students who have graduated from the College. Current students Ali (YR43/2018, Canada-AB) and Tomma (YR 43/2018, Burkina Faso) each shared powerful spoken word meditations on their young life experiences in English and French, respectively. Faculty member Andrew Sewell spoke about instilling both classroom and life lessons at Pearson. Finally, led by Quni (YR 43/2018, Greenland), a group of Pearson students shared a powerful and visually dramatic Inuit seal dance entitled Uajii.

None of these awareness-building and celebratory events would have been possible without the extraordinary efforts of countless staff, volunteers and students from Pearson College UWC. I am deeply grateful to the inspiration and the many, many hours that went into creating, supporting and delivering these events. But, we are not finished — we will continue to mark Mr. Pearson’s anniversary and his legacy throughout this academic year so please be sure to check our website and our social media channels in 2018.