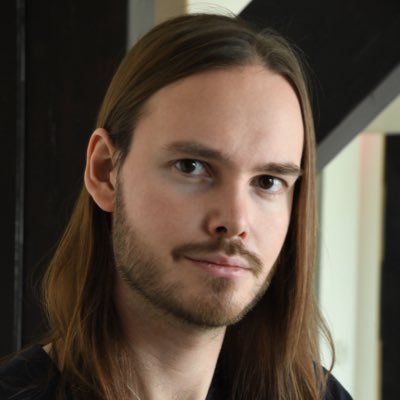 When I first met Rinus van Hall (Year 35/2010, Netherlands) via Zoom, his occupation as a painter was evident. Canvases lit up the computer screen all around him. Surrounded by colourful paintings in a stylish gallery downstairs from his studio, the young artist from Amsterdam is both generous with his time and serious in his demeanor. His passion for the fine arts makes it no surprise that he is on a steady climb up the rungs of Dutch and international art circles.

But what might be less well known in these parts is a prestigious assignment the Pearson College UWC alumnus recently completed to design a new commemorative five-Euro coin.

Van Hall was raised in Amsterdam, the son and grandson of artists. Coming from a family of creatives, his parents counselled him early on to try something more stable. “But” he says with a shrug, “the blood creeps where it cannot go,” explaining with a Dutch adage for one’s true character revealing itself.

The profession van Hall has chosen is not exactly what he envisioned early on in his career. At the age of 15, van Hall heard about Pearson while attending middle school in Amsterdam. After seeing a presentation about the United World College system, Van Hall went home and definitively told his parents that he would be going to UWC. True to his word, van Hall applied and found himself with a UWC scholarship. He chose Canada, drawn by the beauty of Pearson College.

Van Hall describes his experience at Pearson as a very contented time. He was enamored of scuba diving and took to the ocean almost daily to explore the straits, reefs and islets between Pedder Bay and Race Rocks. “I was very happy” he recounts. He also took many fine art classes and explored different mediums.

One of his most vivid memories was of survival camping for Project Week with teacher Mark Wheen.

“We all biked to a lake quite high somewhere. It was survival camping, and we did not bring any food or water.” He recounted the hunger that quickly set in as they realized just how much food they needed to sustain a group of eight students and a few teachers. “I think I have never seen more joy in Mark’s eyes when I managed to catch a few fish. We were starving” he chuckled. “I remember arriving back and eating the best banana of my life.”

Although van Hall had delightful memories and formative growth during his time at Pearson, his return to the Netherlands brought with it new struggles. Two years in Canada had changed his outlook in many ways and it was difficult to fit in with old friends back in Amsterdam. He completed an undergraduate degree in architecture and started a graduate degree. There came a turning point where he finally had to admit that the nine to five office realities of designing buildings was just not for him. Feeling unsatisfied with his career prospects and looking for a different kind of inspiration, van Hall happened to get a box of oil paints from my grandmother as a Christmas present. He took up a paintbrush and re-discovered his love for painting and the fine arts.

Intrigued with the possibilities, van Hall began to study the Dutch Masters, creating portraits using the techniques of Rembrandt and Vermeer. He persevered through two difficult years, adding to his portfolio and developing his style.

Bit by bit, he came to be known in art circles around Amsterdam. In 2018 he was commissioned by a museum to cover an unusual and urgent assignment. The museum had been unable to receive their central piece for an exhibition and they were missing their star painting, the very one that graced the cover of their catalogue. With four days to go, the museum approached van Hall to ask if he could not only paint a replica of the piece, but also if they could film his process as he worked. Ever eager to launch into a new challenge, Van Hall agreed. He painted a replica of the piece live inside the museum during the opening reception. “There were some sleepless nights” van Hall remembers, “but it worked out”.

As luck would have it, this transpired only a few weeks before his first solo exhibition. The director of the museum saw an opportunity to help, and she garnered much needed publicity for his show. Van Hall’s career was launched.

€5 and the Royal Dutch Mint

In 2020, van Hall heard about a Royal Dutch Mint competition to design a new €5 and €10 Euro coins to commemorate the 30th year of the Treaty of Maastricht. A rather intimidating committee that included the directors of the most prestigious art schools in the country judged all the entries. Despite the odds, van Hall was one of seven artists short-listed for the award.

Although he found the competition a bit intimidating, “I was confident in my design” he explained. “I took bigger risks by becoming an artist so I was used to that feeling,” adding that he took in elements of his training in architecture to come up with the final images.

The Treaty of Maastricht and van Hall’s design

The Treaty of Maastricht, signed in 1992, was the agreement that started the European Union and paved the way for a common currency. 12 European countries signed, including France, Belgium, the Netherlands, Italy, Spain, Greece, Denmark, Germany, Luxembourg, Britain, Portugal and the Republic of Ireland.

Van Hall explained that in coming up with his design, he not only focused on the elements that had to be in the design, he also focused on its aesthetics. The design incorporates 12 pens and 12 stars, which in turn represent the 12 original signatories. The pens draw lines into the centre of the coin, which merge into the three pillars symbolizing the central tenets of the EU. On the other side of the coin, the portrait of King Wilhelm of Orange surrounds the radiating star pattern that forms the design of the ceiling in which the Treaty was signed.

Van Hall was only able to see his design on the coins after nearly a year which spanned the original competition, refining and finally minting of the finished coin.

“I could tell no one [about my coin design] for six months, not even close family.”

Was there any special reason for a Euro coin commemorating the Treaty of Maastricht now?

“I think it was a bit unusual to have a 30-year commemoration, so yes” van Hall said. “Perhaps there was special cause for it, given current events.”

With the portrait of King Wilhelm adorning Dutch Euros, the King and his family also attended the coin’s unveiling. As students from UWC Maastricht performed, the King pressed the ceremonial first coin. With King Willem-Alexander and his daughter both former and current students of UWC Atlantic respectively, the ceremony was a particularly proud moment for United World Colleges movement, particularly in the Netherlands.

What is next for van Hall? While some of his pieces have examined portraiture in the social media age, he is now exploring how artists and audiences can engage with paintings in virtual reality and augmented reality platforms. He is contemplating a return to school, in part due to the studio space and access to grants and programs it creates.

Whatever the future holds for Rinus van Hall, we will certainly see the results of his labours, shown in galleries, featured online, and perhaps now and then, even appearing in our wallets.