It’s good to be back at UWC, a little older and a little wiser. 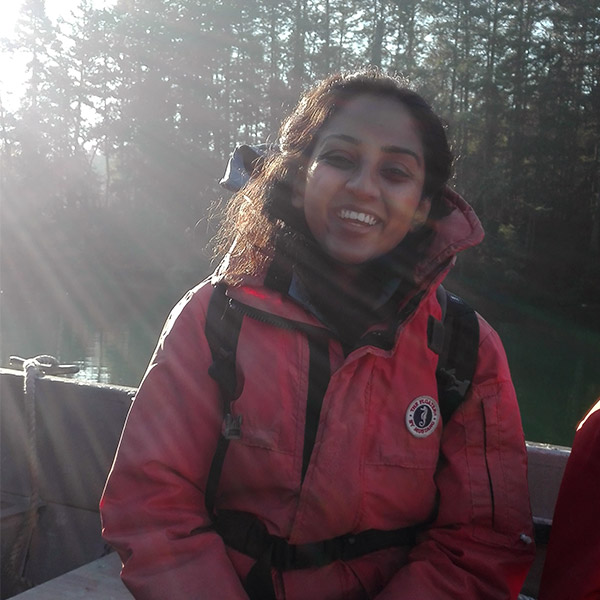 Our current alumna-in-residence, Michelle Luiz, is nature-bound, curious and courageous. She graduated from UWC-USA in 2015 and is currently in her last year at the University of British Columbia (UBC) in Vancouver. We met on a sunny day near the Spiritual Centre, where she talked about her long-standing connection to UWC.

Pearson: Since you graduated from Armand Hammer United World College of the American West (UWC-USA), what have you been up to?

Michelle Luiz: Growing up in Botswana, I was your stereotypical nature-loving kid – I would spend hours alone in my backyard trying to name all the plants and animals. But it was only after I studied environmental systems and societies (ESS) at UWC-USA that I considered making a career out of it. I’m currently finishing my undergraduate degree in Natural Resources Conservation under the Faculty of Forestry at UBC. It’s a broad and multi-disciplinary degree that combines everything from sociology, geography economics, planning to ecology and biogenetics. As a newcomer to Canada, I’m grateful to be exposed to relevant resource issues in BC and the communities that surround them.

Pearson: What were your first impressions of Canada’s UWC, Pearson College UWC?

Michelle Luiz: I was most surprised at how familiar it felt! As a UWCer, I had mistakenly expected Pearson to feel different from its surroundings. Yet, coming in as a Vancouver resident, I knew more about the environmental and social context than I did about the students. My experience as a first-year UWC student in rural New Mexico was quite the opposite.

Pearson: How has your stay on campus been so far?

Michelle Luiz:  All in all, my transition back to UWC has been easy, enjoyable and smooth. I live right in the middle of the campus and have been warmly welcomed from day one.  Pearson is an inclusive environment that really empowers everyone to help out in their own individual way.

Pearson: What exactly do you help out with in your role as alumna-in-residence?

My daily schedule is quite flexible and varied. This past month, I helped prep, support and lead part of the Wilderness CAS week.  During the week, I take kayak lessons from second-year leaders, train with the staff outrigger team and sit in on various other CAS activities. Suffice to say I’m learning a lot!
Over the next month, I hope to host a few events through local conservation organizations and facilitate an event on Women in the Outdoors. I’m also working on a project to map the trails around campus and compile information on land-use history of the region.

Pearson: What kind of differences between UWC-USA and Pearson College UWC did you notice?

Michelle Luiz:  I’ve been telling students that UWC is like a country of its own, with the mission statement weaving together all the schools. This has a powerful effect. In some ways UWC feels like returning to a home country – the people and the built environment change, but the core essence feels much the same.
With that, I’d say there are more similarities between UWC-USA and Pearson than there are differences. It was a happy realization to see that I haven’t “lost” my UWC spirit. As an alumna, I am constantly connected to the movement for the values it fosters. I’m thrilled to be amidst the energy and excitement again – starting passion projects, allowing oneself to fail and then getting right back up. Additionally, the marine opportunities at Pearson are truly unmatched. Students are lucky to be home in such a bio-diverse region of Canada!

Pearson: How would you describe the Alumni-in-Residence Program?

Michelle Luiz: In one word? Immersive. The A-I-R program is really in the hands of the participant. Each visiting alumnus will find a unique way to contribute their knowledge to Pearson’s community life.
All in all, the program is a fantastic idea that I believe equally rewards the alum and the campus community. It’s also a wonderful opportunity to add to the diversity of age groups and perspectives on campus. It’s good to be back, a little older and a little wiser.

Pearson: Tell us about your plans for the future!

Michelle Luiz: We had a strong Wilderness component at UWC-USA, which is something I brought with me to Vancouver. I think outdoor recreation culture has much room to grow in terms of the type of diversity it attracts and celebrates. My dream is to create a system of outdoor programming for other newcomers in Canada in a way that improves social access to our environment and connection with the land. I think that will go a long way to foster conservation and shared identity.

Pearson: Thanks so much Michelle for your time here on campus, your heartfelt engagement and allowing us a glimpse into your life. We are so grateful to have you on campus.