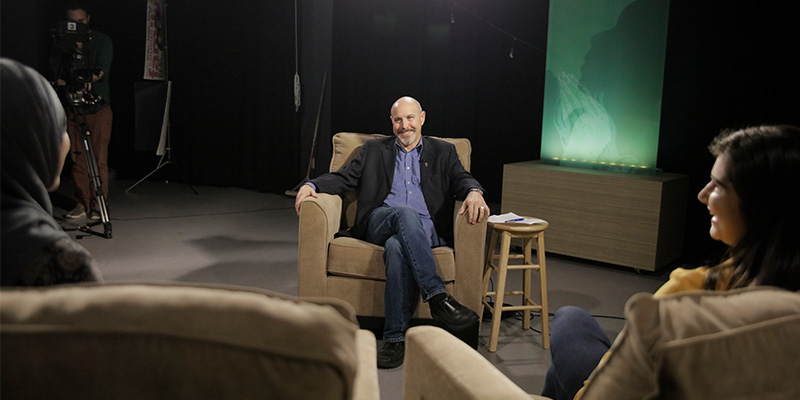 Pedro Guevara Mann (YR 12/1987, Panama) is a man of deep religious faith who never saw a contradiction between Pearson College UWC’s secularism and his own devout Catholicism.

“I never felt attacked, I never felt criticized – I remember a van-load of students being dropped off at various churches every Sunday,” says Pedro, who is a longtime producer at Salt and Light Media (S+L), a faith-based cable and online network based in Toronto. “Pearson for me was always a deeply spiritual place.”

Pedro, who was ordained in 2012 as a Permanent Deacon with the Catholic Church and, through S+L, a blogger who “Deacon-structs” big questions of faith, church teachings and so on,  says that his role as a Deacon allows him the privilege of accompanying people in the highest and lowest moments of their lives: usually when it matters: births, deaths, illness, the loss of a loved one.

“I don’t think I would be such a ‘good’ deacon, had I not had the UWC experience – a completely secular experience — yet, at the same time, a deeply spiritual one.”

Pedro has been deeply involved with World Youth Day (WYD) in one role or another for nearly two decades. Next month, he and his S+L team will travel to Panama City, Panama to cover the January 22 to 27 celebration. WYD, typically celebrated every three years in a different country, is described as, “a worldwide encounter with the Pope which invites young people who want to take part in a festive encounter with their contemporaries centered on Jesus Christ.”

Recently, we had a chance to catch up with Pedro and talk about his past, present and future.

How did you first hear about UWC? What encouraged you to apply?
My brother applied when he was in Grade 11, three years ahead of me. He was not selected, but when I was in Grade 11, I already had some information about Pearson. Our school in Panama had a good relationship with the head of the selection committee at the time. One of the two students selected from Panama three years ahead of me, was also from my school – we were the first to Panamanians to attend a UWC school..

What was it like for you landing on campus for the first time?
I adapted very well. I had had the chance to meet my second year, Rolando, before I arrived — he turned out to be a great friend and a big part of my “survival structure” at the College. I also have cousins who live in Victoria, so that helped my transition – they were a lifeline when I just needed to get away and have a nice home-cooked meal! I can’t say I was prepared for what I saw or experienced — everything was new and exciting. I remember thinking that it was very smart to keep us so busy those first weeks, so we had no time to be homesick.

Who or what influenced you the most while you were on campus?

I can’t say enough about Marks and Marg McAvity – I’m sure I’m not the only one! Suzanne Tremblay was also a great teacher, and with her husband, Louie, great house-fellows. I was very influenced by Gary Fletcher and Phil Foster. Of course, Edgar Samuels and both Theo and Eileen Dombrowski were also great influences – I suppose I can say the same about all faculty and staff; Anne and Marc Abrioux, Hamish and Trish Simpson and even John Davis…. But Marks and Marg stood out for me because of their faith and the support that they offered for students of faith.

Did certain experiences or individuals from your time at Pearson have a strong impact on where your life/career has led you so far?

Considering I have a Theatre degree and work in TV and video/film production, I can say that it was at Pearson where I was first exposed to theatre. I had music and dance, but it was a workshop that was offered with a faculty member from UVIC (Lina de Guevara), that turned me to theatre. In my second year, I spent my project week with LIna at UVIC. It was also at Pearson where I first had experience with basic filming and editing. Then there was the music, the choir, the dancing and all the opportunities for performance. Pearson was a great springboard into the performing arts!

Tell us a little about your family.

I am the youngest of four children. My mom was a Canadian born in Panama (my grandfather was from New Westminster, BC). My dad is Panamanian, and I have an older half-sister from my father’s first marriage. All in all, I have nine nieces and nephews and four grand-nieces and nephews. Everyone is still in Panama. I was married 22 years ago to Sheri – we live just north of Toronto and we have two boys, Nicolas (22) and Daniel (19). Nicolas graduated from the University of Toronto last June with a Criminology degree and is applying to Law School for Sept 2019. Daniel is in 2nd year at Guelph where he hopes to get into the Veterinarian Program.

Tell us about your connections with Panama.

All my family is still in Panama – I travel there once or twice a year. In the last 30 years I would travel home about once every other year. (It used to be more expensive and I was poorer!) I was part of the Panamanian selection committee one year and for many years took on the role of Panamanian UWC network social coordinator – just to help people stay in touch.

Tell us about your travels and careers since you left Pearson.

After Pearson, I came to Toronto to attend York University Theatre Department. At York I learned about an organization called Children’s International Villages (CISV), which promotes similar values as UWC to younger children through camps and exchange experiences. As a CISV leader, I travelled with delegations to Sweden, Ohio and Spain.

From 1992-2000 and then for 9 months in 2002-2003, I worked at Covenant House doing outreach and crisis intervention with street-involved youth. I can confidently say that PC gave me skills that I used daily.

From 2000-2002 I was Artistic Director for World Youth Day. While working with WYD I traveled to Argentina, Rome, Mexico and all over the U.S.

After WYD, I was part of the initial team that founded Salt and Light Catholic Television Foundation, where I currently work as producer. With S+L I travel all over the place: have been to almost every Canadian province (and the Yukon), all over the US, Mexico, Puerto Rico, El Salvador, Venezuela, Bolivia, Brazil, Australia, Italy, Spain, Israel, Jordan and Poland.

Tell us a little more about your WYD connection.

I was originally hired to be in charge of Hispanic Affairs (relations with all Spanish-speaking delegations) and to help with the WYD Cultural Program (the Youth Festival) for WYD Toronto 2002. Very shortly, I discovered many other responsibilities ended up on my plate.

A year before the event, I was made Artistic Director responsible for all artistic programming for the six-day event, including all the main events with the Holy Father, as well as the Youth Festival. The latter included some 400 performances from about 200 groups from some 30 different countries in about 8 languages.

With S+L, I have always been producer in charge of our WYD coverage. We covered Cologne 2005, Sydney 2008, Madrid 2011 and Rio 2013. For Krakow 2016 I was hired by an organization called the Knights of Columbus that does charitable work around the world, to be the artistic director of one of the sites at Krakow 2016, which they were sponsoring, for English-speaking pilgrims. I was in charge of the staging and programming for all the events at that one site (for 30,000 pilgrims) for five days.

For the past 2 years, I’ve been offering some help to the Panamanian Committee with planning Panama 2019 and in January I will travel with the S+L team to cover the event. This can be considered a “Central American” WYD as we anticipate most participating pilgrims will come from Central America and the Caribbean. For many, this is the only opportunity that they’ll ever have to attend a WYD.

Tell us about your role at S+L – sounds like a handful.

As a producer (a catch-all term that means: you do it all!) I am responsible for any given production at any given time. I have produced TV series that I host myself or that others host; I’ve produced documentaries and documentary series; concerts, live event coverage; and service productions for clients. Because of my interests and strengths, if I produce something, I tend to research, write and also direct the project. Quite often I am on camera as host or interviewer. I work with a cameraman or camera team and with an editor.

In particular, there are three projects that I’ve produced that have been very influenced by my UWC experience:

I’ve also worked on many smaller projects that look at interfaith relations. I hope to do more of that.

I’ve always said that WYD and S+L have been the only two jobs I’ve ever had where I feel that all my interests, my background, my experience, my languages, my faith, my beliefs, my intellect and my creativity are being used and I am stimulated socially, emotionally, spiritually and intellectually. That means that every day I use something that I learned or experienced first at Pearson.

I’ve also said that there isn’t one day that goes by that I don’t think of Pearson or remember something that happened there or that I learned there. I’ve made some obvious mentions earlier about a theatre workshop, choir, Ukrainian dance and music, but it’s so much more as Pearson affects your whole being. It is part of who I am and I can’t be who I am. I am blessed to have a job that allows me to be who I am and that, in fact, requires me to be who I am.

At S+L, I get to have ideas and challenge ideas; I get to ask questions; I get to be curious and learn about things that interest me; I get to learn about other people’s points of view; I get to challenge them and they challenge me; and it is a global place – every day I work with people from Italy, France, Peru, the Czech Republic; China, El Salvador, the U.S. and Poland. I speak Spanish every day and often work in Spanish and French.

At the moment, are you involved with any UWC national committees or in any other UWC/alumni role?

I am unofficially the UWC Toronto person pushing the annual Toronto UWC reunion and am an “elder” with the Panamanian UWC network.

What’s in your future?

That’s hard to say. I’m almost positive that I will be at S+L TV until I am not able to work anymore! I’m also positive I’ll always have some connection to WYD – maybe even be part of a select group of people who will have a hand in revitalizing/improving WYDs and how they are managed. Either way, I hope my future holds a lot more travel!